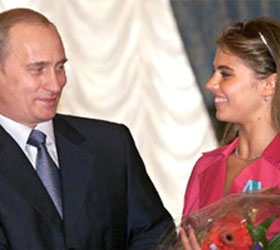 Russian Prime Minister Vladimir Putin has apparently split from his wife Ludmilla and is planning to tie the knot with 24-year-old gymnast Alina Kabaeva.

The revelation comes after a Moscow newspaper reported that Putin recently split with Ludmilla and is preparing to marry the young and very pretty Kabaeva.

A Russian website alleged that Alina was seen kissing Putin in a Moscow restaurant.

There is added piquancy to the fact that, despite her youth, Kabaeva has recently been made an MP.
The gymnast is one of a number of young and beautiful Russian dancers and athletes who, under Putin’s patronage, have lately become deputies in the Duma — Russia’s lower Parliament.

Aged only 15, she won the gold medal in the 1998 European Championships. The following year she secured the world title and was favourite to repeat the success at the 2000 Sydney Olympics. – Indianexpress