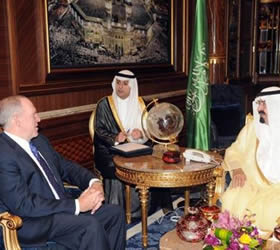 JEDDAH: Custodian of the Two Holy Mosques King Abdullah held talks with John O. Brennan, assistant to the US president and deputy national security adviser for homeland security and counterterrorism, at his palace in Jeddah on Sunday.

According to the Saudi Press Agency, King Abdullah and Brennan discussed issues of mutual concern.