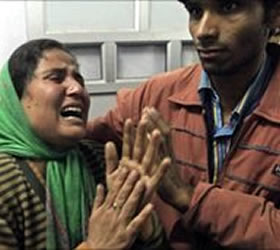 A delegation of Indian lawmakers is in Indian-administered Kashmir on a two-day visit which aims to defuse months of deadly civil unrest in the region.

But prominent separatist leaders said they would not meet the MPs.

Over the weekend, police and protesters clashed violently in the valley as residents continued to defy curfew.

Anti-India sentiment is high in Kashmir, where more than 100 protesters have died since June. Nearly all were shot dead by government forces.

The valley has been under an almost round-the-clock curfew for more than a week.

The delegation is headed by Indian Home Minister Palaniappan Chidambaram and includes lawmakers from all major national parties.

The police have been busy painting over anti-India slogans on walls and roadside curbs, and a huge security operation has been mounted to coincide with the MPs’ visit, our correspondent adds.

Syed Ali Shah Geelani, leader of the hardline faction of separatist group the Hurriyat Conference, has refused to acknowledge the delegation.Mirwaiz Umar Farooq, leader of the moderate wing of the Hurriyat Conference, and Yasin Malik, who is head of another separatist group, the Jammu Kashmir Liberation Front, have also said they will boycott the meeting.

Local Kashmiri media say they are ignoring the visit, too, in protest at restrictions upon them.

Kashmir has been on the boil since June, with tens of thousands of protesters taking to the streets.

Protesters in the mainly Muslim valley have hurled stones at troops and demanded independence from India.

Many analysts see the recent unrest as the biggest challenge to Indian rule in Kashmir for 20 years. -BBC