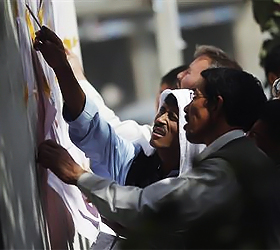 (Reuters) – The top United Nations diplomat in Afghanistan said on Sunday it was too early to describe a parliamentary election as a success, with an expected 4,000 complaints to be heard and turnout figures not yet established. Afghan election officials declared Saturday’s result a success despite widespread reports of fraud, worryingly low voter turnout and attacks across the country that killed at least 17 people after the Taliban vowed to disrupt the poll.

“I think that that is premature, with all due respect,” Staffan de Mistura, special representative for U.N. Secretary-General Ban Ki-moon told Reuters in an interview. “They have done a great job … But I would wait to talk about success,” he said in Kabul.

Election officials pored over votes on Sunday but there will be a long wait before even preliminary results are declared, with ballots still to come in from remote areas and thousands of complaints expected from unsuccessful candidates. The election was being closely watched in Washington ahead of U.S. President Barack Obama’s planned war strategy review in December, which will likely examine the pace and scale of U.S. troop withdrawals after nine years of war. A flawed poll would weigh on Obama when his administration faces mid-term Congressional elections in November amid sagging public support for the war, with violence at its worst since the Taliban were ousted in 2001.
Some areas have started sending checked ballot boxes back to Kabul, the Independent Election Commission (IEC) told Reuters, but early signs were that almost a million fewer votes were cast than in a flawed 2009 presidential poll.
The IEC said on Saturday the number of Afghans who cast ballots was about 3.6 million, although de Mistura said the final figure would likely be around 4 million.

The IEC has said there were 11.4 million voters but de Mistura said that number only represented the number of ballot papers sent to polling stations and that the real number of eligible voters was probably closer to 10.5 million.
‘ALMOST A MIRACLE’
The Taliban twice threatened to disrupt the election and warned voters to stay away. Their threat seemed to have some impact on turnout, with nervous voters staying at home after the hardline Islamists launched scores of attacks across the country.
The bodies of three election officials kidnapped during voting were found in northern Balkh province on Sunday, IEC chairman Fazl Ahmad Manawi said.
The violence was slightly down on last year’s election but was more widespread, and reached into once peaceful areas. Attempted fraud was also a major concern, with reports of ballot-stuffing, repeat voting, vote-buying and other fraud coming in from across the country. The challenges meant many observers were circumspect in assessing the poll, a key test of government credibility after the 2009 presidential election was tarnished by massive fraud. The U.S. embassy in Kabul said the results and quality of the poll would not be immediately evident. Likely many, de Mistura congratulated the IEC for staging the poll amid an insurgency that is at its most violent since the Taliban’s ouster in 2001. “If they meant success holding the election, then we would all agree, it was almost a miracle,” de Mistura said. “Beyond that I would wait and be cautious.”

The Free and Fair Election Foundation of Afghanistan reported “extensive irregularities” ranging from the destruction of polling centers to ballot stuffing, erratic opening and closing times of polls and interference by candidates. In a statement on its website, FEFA called on the IEC “to ensure the integrity of the rest of the electoral process.” De Mistura said he expected as many as 4,000 complaints which the U.N.-backed Electoral Complaints Commission would have to judge. Most would come from candidates who did not win one of the 249 seats in the wolesi jirga, or lower house of parliament. The ECC itself has termed the election “disputatious.”

The final turnout figure will likely be the lowest of the four elections held in Afghanistan since the Taliban were toppled — presidential elections in 2004 and 2009 and parliamentary polls in 2005 and 2010.

“The declining trend signifies several things, most prominently a growing disillusionment and disengagement with the process, and the impact of a worsening security situation,” Martine van Bijlert of the Afghanistan Analysts Network wrote in a blog on Sunday (here)

Preliminary results are due to be published on October 8 at the earliest, with final results not out before October 30. The need for the ECC to adjudicate on so many complaints could push that timeframe out even further – Reuters