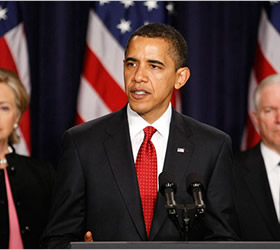 WASHINGTON, Sept 17 (APP): Acknowledging Pakistan’s resolve to soon regain poppy-free status, President Barack Obama has reaffirmed the United States’ counternarcotics cooperation with the key regional country. “The Government of Pakistan remains concerned about opium poppy cultivation in Pakistan and is working to return to opium poppy-free status soon,” he said.A joint U.S.-Pakistan survey in 2009 estimated that 1,779 hectares of opium poppies were under cultivation in Pakistan, approximately 130 hectares less than was under cultivation in the country during the previous year, Obama noted in a memorandum for the U.S. Secretary of State.The memorandum is presidential determination on Major Illicit Drug Transit or Major Illicit Drug Producing Countries for Fiscal Year 2011.

“The range of U.S.-Pakistan initiatives, which include programs to defeat the insurgency on the Pakistan-Afghanistan border and prevent terrorist safe-havens, have the spin-off effect of helping Pakistan to fortify its land borders and seacoast against drug trafficking and terrorists, support expanded regional cooperation, and encourages Pakistan to return to opium poppy-free status,” he said in the document released by the White House on Thursday.
Obama notes that the United States Government support “focuses especially on upgrading the institutional capacity of Pakistan’s law enforcement agencies.”
Pakistan has been identified as a major transit country for opiates and hashish, for world markets, especially for narcotics originating in Afghanistan.
According to the determination, Afghanistan remains the world’s largest producer of opium poppies and a major source of heroin.
Other countries identified in the U.S. list as major drug transit or major illicit drug-producing countries include The Bahamas, Bolivia, Burma, Colombia, Costa Rica, Dominican Republic, Ecuador, Guatemala, Haiti, Honduras, India, Jamaica, Laos, Mexico, Nicaragua, Panama, Peru, and Venezuela.
The presidential determination clarifies that “a country’s presence on the Majors List is not necessarily an adverse reflection of its government’s counternarcotics efforts or level of cooperation with the United States.”
The U.S. president notes that Pakistan is “still challenged by extremist groups who have power over parts of the Federally Administered Tribal Areas, particularly where most of Pakistan’s poppy is grown.”
The determination claims these extremist groups are also found in settled areas of the Khyber-Pakhtunkhwa Province such as its capital, Peshawar, and the Swat Valley and expresses the understanding that the Government of Pakistan is forced to divert law enforcement resources and equipment from poppy eradication efforts to address these incursions.
The memorandum says Afghanistan continues to be the world’s largest producer of opium poppies and a major source of heroin.
“The connections between opium production, the resulting narcotics trade,corruption, and the insurgency continue to be among the most challenging obstacles to reducing the drug threat in Afghanistan. Poppy cultivation remains largely confined to provinces in the south and west where security problems greatly impede counternarcotics efforts. Nearly all significant poppy cultivation occurs in insecure areas with active insurgent elements, although progress has been made in stabilizing these regions.
Nevertheless, the country must demonstrate even greater political will and programmatic effort to combat opium trafficking and production nationwide.”
Recognizing the anti-narcotics commitment shown by President Karzai’s government, the determination says a noteworthy achievement is the reduction of opium poppy cultivation from 157,000 hectares in 2008, to 131,000 hectares in 2009, a 17 percent decline. -app