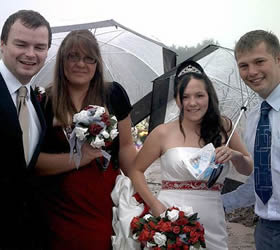 The fiancée of a hero soldier killed in Afghanistan has ‘married’ him at his graveside on the day they were due to wed.

Kelly Burgess, 20, went ahead with the service four months after Fusilier Jonathan Burgess died in a gun battle with the Taliban.

Kelly, who gave birth to their daughter Abigail just weeks after Jonathan died, wore her wedding dress for the cemetery ceremony surrounded by family and friends.

Abigail was a bridesmaid, Jonathan’s brother was the best man and Kelly wore the wedding ring she had bought for their big day.

A vicar blessed their relationship as the 50 guests smiled through their tears  Kelly said: ‘It was special, I loved it. Everyone else was crying, but I wasn’t.

‘The vicar was really nice but he was stuck for words, because you don’t really have anything written for that kind of thing.

‘There were still people there visiting the other graves, but I didn’t care. I was marrying my boy.

‘I left a wedding day card on his grave – I put ‘Love from Kelly’ on it.

‘There was nothing weird about it because I felt that Jonathan was there with me.’

The couple were planning their wedding in Worksop in Kelly’s native Nottinghamshire when Jonathan was killed in April while Kelly was eight months pregnant.

Jonathan, 20, who was serving with 1st Battalion The Royal Welsh, was due to fly home just a few days later for the birth of their baby.

He had a copy of the baby’s scan in his army fatigues when he was shot.

Proud Kelly dropped her maiden name of Forrest within days of losing her fiance – then decided to go ahead with a wedding service as a tribute to their love.

Kelly, an Army clerk in Chester, said not even the rain spoiled the unique ceremony.

She added: ‘We had the blessing at the graveside with the vicar and I wore my wedding dress I bought before Jon’s death.

‘I had my two bridesmaids there as well – one was my cousin Alex and the other was our daughter Abigail.

‘They were wearing red dresses because Jon wanted Lady in Red (by Chris de Burgh) as the song for the first dance.’

Jonathan’s brother Ashley was best man, with his parents Royston and mum Susan also at the service in his hometown of Swansea.

Kelly said: ‘We went out in the night to celebrate. ‘I stayed in my dress. It was filthy, but I’m only going to wear it once.

‘I got a bracelet from one of my friends with ‘Kelly and Jonathan forever’ on it.

‘They also got me some champagne.

‘I bought my wedding ring and Jon’s wedding ring, which was the same size as mine so Abigail can have it when she gets older.’

Kelly said Abigail, who was born on May 13, was a constant reminder of the her father.

She looks like Jon in almost every way, but her eyes are mine,’ Kelly added.

‘I talk to Abigail about Jon every day and I keep a Dear Jonathan diary.

‘I’ve also kept the pictures of the wedding in there for her to see when she is older.’

A card written by Kelly was still leaning against the simple wooden cross which marks the soldier’s grave at Morriston Cemetery in Swansea yesterday.
It says: ‘To my wonderful husband on our wedding day.’

At Jonathan’s funeral in April, Kelly organised 16 white roses to be placed on Jonathan’s coffin, which was wrapped in the Union flag.

Kelly, still heavily pregnant at the time, bravely walked behind her fiance’s coffin, pausing to look at the bouquet and card she wrote saying: ‘I promise to tell Abigail about her daddy and how much you love her.

‘Forever in our hearts RIP Boyo. Gone but not forgotten.’

Proud Kelly said: ‘Part of him will live on forever in Abigail.

‘He was so excited about her. I gave him the 12-week scan picture to take with him to Afghanistan.

‘My friends in the company told me he always kept it in his top left pocket.’  But

Jonathan would never see his daughter in the flesh – cut down by a Taliban bullet.

Kelly said: ‘It just did not sink in at all when I was told. I was in denial.

‘I was at the barracks in Chester and when I got back to my house there I just started tidying and cleaning the house, getting it nice for Jonathan.’

The pair fell in love two years ago at the platoon’s barracks in Chester where Kelly worked as a clerk.

‘I spoke to him when he was standing outside the Adjutant’s office because he had been trouble again,’ said Kelly.

‘I thought he was cocky and arrogant, but I liked him.’  She added: ‘I love Jonathan and miss him so much.’ -dailymail