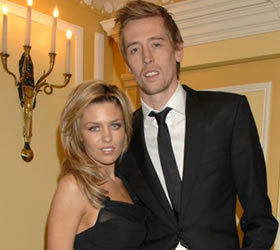 The angry Tottenham Hotspur striker revealed model Clancy had told him about the pregnancy less than two weeks after he allegedly paid a prostitute £800 for sex during a stag party in Madrid.

The 29-year-old claimed he was ‘upset’ that news of Clancy’s pregnancy was published in The Sun newspaper – against her wishes – after reporters allegedly followed her to a private clinic.

‘Abbey told me on 25 July that she was pregnant but we agreed to keep it private until she was ready to make an announcement,’ said England international Crouch in a statement.
‘There were even some members of our families who were still unaware that Abbey is pregnant until today’s revelations in The Sun.’ His lawyer Graham Shear added: ‘Peter Crouch today condemned intrusive Sun reporters who followed his girlfriend to a private clinic and eavesdropped and apparently recorded her private conversation in a restaurant.

‘The Sun published a story stating that Abbey is pregnant, depriving her of the opportunity to make this public in her own time and in her own way.’

But the defiant newspaper defended breaking the news and said: ‘The story in The Sun speaks for itself.

‘She spoke to a number of people in public about her 12-week scan.’

Friends of 24-year-old TV presenter Clancy yesterday revealed she stayed with Crouch at their £3million home in Weybridge, Surrey, throughout the media storm following his alleged tryst with a hooker in July. – Metro