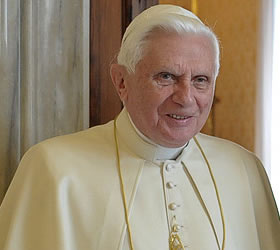 The first state visit by a Pope to the UK gets under way later when Benedict XVI flies into Edinburgh.

He will meet the Queen at Holyrood House and parade through the city before an open-air Mass in Glasgow.

Tens of thousands of people are set to line the streets to greet him, although some protests are also planned.

One of the Pope’s aides has pulled out of the trip after reportedly saying arriving at Heathrow airport was like landing in a “Third World country”.

The visit is the first to the UK by a Pontiff since John Paul II in 1982. Vatican officials say Pope Benedict will highlight the importance of the role of faith for everyone in contemporary Britain, not just Catholics and Anglicans.
Child abuse

The leader of the Roman Catholic Church in England and Wales, Archbishop Vincent Nichols, said the visit was eagerly anticipated.

“The Catholic tradition in this country is one of actually very profound loyalty to the person of the Holy Father,” he said.

Prime Minister David Cameron has said it will be “a very special four days, not just for our six million Catholics, but for many people of faith right across Britain”.

But the Pope’s visit is controversial among campaigners who say they were sexually abused by Catholic priests as children.

They have accused Church authorities of a culture of secrecy and of not taking strong enough steps against abusive priests.

The head of the National Catholic Safeguarding Commission said he was confident a meeting between the Pope and victims would go ahead during the trip.

Bill Kilgallon said he expected a group of less than 10 to meet the Pontiff without anyone else present, and with no restrictions on what was said before or after.

In Edinburgh, Presbyterians, secularists, and other groups are planning to protest against Vatican policies on birth control, gay rights and abortion, but police have said they do not expect large-scale demonstrations.

On Wednesday, more than 50 public figures added their names to a letter in a newspaper saying the Pope should not be given the “honour” of a UK state visit.

The signatories to the letter in the Guardian include Terry Pratchett, Philip Pullman and Stephen Fry.

Meanwhile, one of the Pope’s senior advisers – Cardinal Walter Kasper – will not make the trip after reportedly making comments about the UK in a German magazine.

He was quoted as saying: “England today is a secularised and pluralist country. When you land at Heathrow airport, you sometimes think you’ve landed in a Third World country.”

He is also said to have described England as “a new and aggressive atheism”.
800-strong choir

The Vatican said the cardinal had not intended “any kind of slight” and had simply pulled out due to illness.

They also said his “Third World” comment referred to the UK’s multicultural society. while the UK Cabinet Office said the cardinal’s views did not represent those of the Vatican or UK bishops.

Drivers in Edinburgh are being warned to expect delays because of road closures and parking restrictions as the Popemobile joins the St Ninian’s Day parade amid tight security. On Thursday evening, the Pope will hold an open-air Mass at Bellahouston Park in Glasgow – billed as the largest organised event during the visit. It will be preceded by performances from an 800-strong choir, Britain’s Got Talent star Susan Boyle, and Pop Idol winner Michelle McManus. The Catholic Church in Scotland had hoped to attract up to 100,000 to the event, but later reduced the capacity to 65,000 after a slow take-up of tickets.

A similar Mass given by Pope John Paul II 28 years ago attracted some 300,000 followers.

Dioceses in England and Wales have also reported thousands of unfilled places for a vigil in London’s Hyde Park on Saturday and a beatification Mass in Birmingham on Sunday.

Organisers of the latter ceremony expect 54,000 to 55,000 people to attend the 60,000-capacity event in honour of the 19th century cardinal John Henry Newman.

The Pope flies to the capital on Thursday night and will spend the next two days meeting religious and political leaders, Catholic groups and holding prayers and Mass.

On Friday, the Popemobile will parade from Lambeth Bridge to Millbank, and on Saturday, along Horse Guards Road, The Mall and on to Hyde Park.

The Association of Chief Police Officers has estimated the cost of policing the trip at £1.5m.

Lord Patten, the prime minister’s representative for the visit, has said the total cost of the Pope’s stay to the taxpayer will be between £10m and £12m.

Juliet Wilson, from the Humanist Society of Scotland, said: “I think he should be able to come whenever he likes, but the Vatican, with their enormous wealth, should pay for that.” -BBC