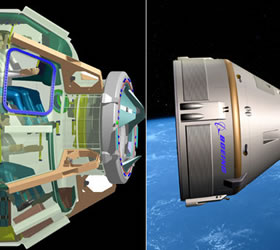 Boeing  said Wednesday that it was entering the space tourism business, an announcement that could bolster the Obama administration’s efforts to transform the National Aeronautics and Space Administration into an agency that focuses less on building rockets and more on nurturing a commercial space industry. The flights, which could begin as early as 2015, would most likely launch from Cape Canaveral in Florida to the International Space Station. The Obama administration has proposed turning over to private companies the business of taking NASA astronauts to orbit, and Boeing and Bigelow Aerospace of Las Vegas won an $18 million contract this year for preliminary development and testing of a capsule that could carry seven passengers.

Current NASA plans call for four space station crew members to go up at a time, which would leave up to three seats available for space tourists. The flights would be the first to give nonprofessional astronauts the chance to go into orbit aboard a spacecraft launched from the United States. Seven earlier space tourists have made visits to the space station, riding in Russian Soyuz capsules.

“We’re ready now to start talking to prospective customers,” said Eric C. Anderson, co-founder and chairman of Space Adventures, the space tourism company based in Virginia that would market the seats for Boeing.

Boeing and Space Adventures have not set a price, although Mr. Anderson said it would be competitive with the Soyuz flights, which Space Adventures arranged with the Russian Space Agency. Guy Laliberté, founder of Cirque du Soleil, paid about $40 million for a Soyuz ride and an eight-day stay at the space station last year. But the prospects that anyone buying a ticket will get to space on an American vehicle hinge on discussions in Congress about the future of NASA.

As the era of the space shuttle winds down — two, perhaps three shuttle flights remain — a clash of visions over what should come next has kept the space agency adrift for much of the past year. An authorization bill written by the House Science and Technology Committee to lay out the direction of NASA for the next three years would largely follow the traditional trajectory for human spaceflight. It calls on NASA to build a government-owned rocket — likely the Ares I, which NASA has been working on for five years — for taking astronauts to the space station and then a larger one for missions to the Moon, asteroids and eventually Mars.

The competing vision, embodied in President Obama’s 2011 budget proposal for NASA, focuses instead on investing in companies like Boeing that want to develop the space equivalent of airlines. NASA would then just buy seats on those rockets to send its astronauts to the International Space Station.

Competition, the thinking goes, would drive down the costs of getting to space, leading to a profitable new American industry and freeing more of NASA’s budget for deep-space missions.

Advocates of the free enterprise approach are rallying to block the House version of the NASA authorization bill, which provides only $150 million a year over the next three years for the private-sector space travel initiative, which is known as commercial crew.

Bob Werb, chairman of the Space Frontier Foundation, was blunt in his assessment of the House bill. “I think it’s awful,” he said. “It’s leaving NASA with way more pork than program. I see that as a disaster for the agency.” Mr. Werb’s group is urging its supporters to register disapproval with their Congressional representatives.

By contrast, the president’s budget proposed $6 billion over five years for the commercial crew program.

At Wednesday’s news conference, Boeing officials said that the federal government would have to pay much of the development costs in order for the effort to succeed. “This is an uncertain market,” said John Elbon, program manager for Boeing’s commercial crew effort. “If we had to do this with Boeing investment only and the risk factors were in there, we wouldn’t be able to close the business case.”

The tight constraint, of course, is money.

Last year, a panel led by Norman R. Augustine, a former chief executive of Lockheed Martin, concluded that the ambitious program started under President George W. Bush to establish a permanent moon base was “not executable” because of inadequate financing. In fact, the panel could not devise any program that could send astronauts beyond low-Earth orbit and still fit within the $100 billion allocated to the human spaceflight program in the fiscal years of 2010 through 2020. It offered several alternatives that would require an extra $30 billion over the next decade.

Mr. Obama’s budget request for 2011 sought a modest increase in NASA over all, to $19 billion, but kept the budget projections for the human spaceflight program almost unchanged from the levels that the Augustine panel found inadequate. The panel said that without an increase, the United States should scale back its space ambitions.

“With that budget,” Mr. Augustine said in an interview this summer, “I still think there is no really meaningful space exploration program that involves humans.”

The administration worked around the budget shortfall by proposing the cancellation of the entire moon program, known as Constellation, including the Ares I rocket and the Orion crew capsule. Instead, NASA would essentially take a five-year hiatus from large-scale development initiatives and instead work on new technologies that could make the task of space exploration easier and cheaper.

The House Science and Technology Committee, in its effort to squeeze NASA’s human spaceflight program into the budget box, deleted almost all the money from commercial crew and large-scale technology demonstration projects and applied it to slimmed-down Constellation rockets.

Last month, the Senate passed its version of the NASA authorization bill, which is more of a compromise. It provides less for commercial crew in the first three years than the president’s request, but the longer-term plan is to provide the same $6 billion, spread over six years instead of five. It cancels the Ares I rocket and instead directs NASA to begin development of a heavy-lift rocket and indicates that the design should be based on space shuttle technologies, a boon for those contractors.

However, some experts like Scott Pace, a former NASA official who now heads the Space Policy Institute at George Washington University, said the Senate bill might be repeating the mistake of asking NASA to do too much with too little money. The Senate bill provides less money for development of a larger heavy-lift rocket than the House does for completing the Ares I, already well under development.

“I respect the need for political compromise,” Dr. Pace said of the Senate bill, but added, “It takes some programmatic risk. It spreads itself out too much.”

Staff members of the House science committee have been meeting with their counterparts on the Senate’s Committee on Commerce, Science and Transportation seeking a middle ground. House leaders could move forward with the science committee’s bill or substitute the Senate bill or a compromise.

If no final NASA authorization emerges, the Senate and House appropriation committees would decide what to include in NASA’s 2011 budget and could end up with something closer to the original Obama proposal. – Nytimes