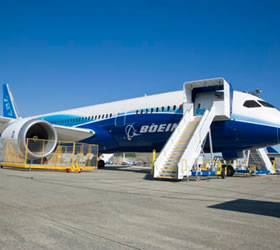 CHICAGO: Boeing Co. says it has grounded one of the new 787s it is testing because of an engine problem. Boeing says the plane was getting ready for takeoff in Roswell, New Mexico, when its engine surged.

Spokeswoman Yvonne Leach says the crew and the plane were not in any danger. Rolls-Royce sent a new engine that was being installed on the plane on Wednesday.

She says it’s too soon to know how soon the plane will fly again, or if the 787 testing schedule will be affected.

Boeing has six of the planes in flight tests and is aiming to deliver the 787 early next year, when it will be more than two years late.

The issue was reported on Wednesday by the trade publication Aviation Week. Arabnews