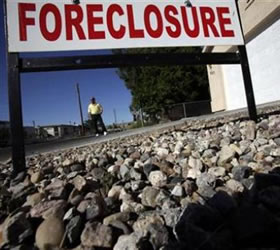 A record number of homeowners lost houses to their banks in August as lenders worked through the backlog of distressed mortgages, real estate data company RealtyTrac said on Thursday.

New default notices decreased at the same time, suggesting that lenders managed the flow of troubled loans and foreclosed properties hitting the market to limit price declines, the company said.

In 2005, before the housing bust, banks took over just about 100,000 houses, according to the Irvine, California-based company.

“It really does look like we’re seeing a slowdown of new foreclosures being initiated as part of a means to manage inventory levels on the market,” RealtyTrac senior vice president Rick Sharga said in an interview.

Banks foreclosed on 95,364 properties in August, topping the May 2010 record by 2 percent. These repossessions, or real estate owned (REO) homes, jumped 3 percent in the month and 25 percent in the year.

It will take about three years to work through the stockpile of distressed housing, Sharga said, resulting in a market that moves sideways.

Total foreclosure actions last month, including notice of default, scheduled auction and repossession, were made on a total of 338,836 properties in August, up 4 percent from July and down 5 percent from August 2009.

The number of homes getting at least one notice topped 300,000 for the 18th month in a row.

One in every 381 housing units got a foreclosure filing last month.

Slowing home sales, after buyer tax credits of up to $8,000 ended in April, could tilt more owners toward foreclosure.

Homeowners that are upside down, or have a mortgage bigger than the home’s value, often cannot sell or refinance.

Foreclosure auctions were scheduled for the first time on about 147,000 properties last month, up 9 percent from July and the second highest total in records dating back to April 2005.

Nevada, Florida, Arizona and California had the highest state foreclosure rates in August, with Nevada topping the list for the 44th straight month despite a 24 percent drop in foreclosure actions from a year earlier.

Idaho, Utah, Georgia, Michigan, Illinois and Hawaii were the other states with the highest rates of foreclosure.

The 10 metro areas with the nation’s highest foreclosure rates had fewer actions for a second straight month.

“Some markets may have already peaked, but even with the decreased levels of activity they’re still running at multiples of national averages,” Sharga said. “In some cases it really is a matter of trying to keep inventory levels from overwhelming the local markets.” – Reuters