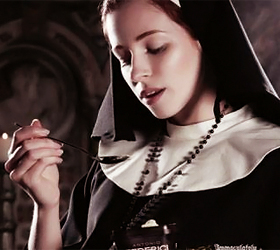 An advert for a brand of ice cream showing a heavily-pregnant nun has been banned for ”making a mockery” of the beliefs of Roman Catholics, a watchdog said today.

The ad for the Antonio Federici brand, which appeared in The Lady and Grazia magazines earlier this year, showed the woman standing in a church holding a tub of ice cream and a spoon with text stating ”Immaculately conceived” and ”Ice cream is our religion”.

Ten readers complained that the ad was offensive to Christians, particularly to those who practised Catholicism.Defending the ad, Antonio Federici said the idea of ”conception” represented the development of their ice cream, and their use of religious imagery stemmed from their strong feelings towards their product.

The company said it also wished to ”comment on and question, using satire and gentle humour, the relevance and hypocrisy of religion and the attitudes of the church to social issues”.
The publishers of The Lady received eight complaints made directly to them and said that, in hindsight, it had been a ”misjudgement” on their part to publish the ad.

The magazine told the Advertising Standards Authority (ASA) that it ”regretted the offence that had been caused to their readers”, adding that they would not publish the ad or anything similar to it in future.
Grazia magazine said it considered that the ad was intended to be lighthearted and not mocking of any religious groups.
The ASA noted that advertising rules stated ads ”should contain nothing that is likely to cause serious or widespread offence”.
It said: ”We considered the use of a nun pregnant through immaculate conception was likely to be seen as a distortion and mockery of the beliefs of Roman Catholics.

”We concluded that to use such an image in a lighthearted way to advertise ice cream was likely to cause serious offence to readers, particularly those who practised the Roman Catholic faith.”
The number of complaints was relatively small, but the ad had been placed in only a small number of publications. It ruled that the ad must not appear again in its current form.
The ASA banned another ad for Antonio Federici in July last year that showed a priest and a nun looking as though they were about to kiss – Telegraph