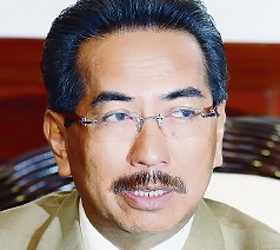 Kota Kinabalu: Chief Minister Datuk Seri Musa Aman said he wants to see the harmonious atmosphere among the people regardless of race and religion to be further enhanced as a motivation to strengthen national unity.

“Unity among the people is reflected in the practice of visiting one another, without any barriersÉthis is what we want,” he said in response to a question at the Hari Raya open house of Deputy Chief Minister Datuk Seri Yahya Hussin.

Musa pointed out that the open house tradition is very common in the State, not only during Hari Raya but also during other festivals such as Christmas, Chinese New Year, Deepavali and Kaamatan.

“All the leaders and people will take the opportunity to gather together during these festive open houses to foster closer ties and understanding, which I think should be continued for as long as can be,” he said.

“For me and all Sabahans, Sept 16 is a very memorable and significant day, a day that we Sabahans have been waiting for all these years,” he said.

He said the people of Sabah and also Sarawak were very happy and grateful to the Prime Minister’s announcement of Sept 16 as Malaysia Day.

“I would like to urge all locals as well as other Malaysians to come to the Padang Merdeka on Sept 16 to celebrate the Malaysia Day together.

Asked whether there would be any surprise on that day, Musa said you would have to come and see for yourselves – Dailyexpress