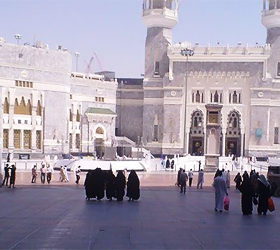 MAKKAH: There has been an exodus of pilgrims and visitors from Makkah as many of them have returned home after completing Umrah during the fasting month of Ramadan.

Many Muslims prefer to perform Umrah during the Holy Month because it is equivalent in reward to performing Haj, according to Prophet Muhammad (peace be upon him). Many of them also opt to fast in the Grand Mosque.

The just-concluded Ramadan was the last opportunity to obtain Umrah visas from Saudi diplomatic missions abroad. They will now start issuing Haj visas.

With the large number of pilgrims and visitors departing, traffic in the holy city has returned to normal.

Residents can now reach the Grand Mosque from any point in Makkah within only 10 minutes.

Reaching the Haram during Ramadan usually took hours because of severe congestion caused by pedestrians and vehicles. Residents of the holy city now have an opportunity to do all their prayers in an empty Haram.

There is enough parking for them. During Ramadan, many of them had to abandon their cars in far away places and walk to the Grand Mosque.

Makkah residents have the opportunity to perform Tawaf (circumambulation) around the Kaaba in ease and comfort, which would have been impossible during Ramadan.

Many women can also do their shopping comfortably now that millions of visitors and pilgrims have left their city. Some Makkah women who only bought clothes for the first and second day of Eid can now complete their Eid shopping.

They can easily walk through the streets of Makkah and visit all the shops without any trouble.

Limousine prices have also returned to normal. Passengers can now pay between SR10 and SR25 from anywhere in Makkah to reach the Haram. During Ramadan, taxi fares cost hundreds of riyals.

Minibuses have reduced their fares to the Haram from SR10 to the normal rate of SR2.

The departure of pilgrims and visitors was, predictably, not welcomed by shopkeepers and hoteliers. Hotel occupancy has plummeted to 20 percent from 100 percent during Ramadan. Shop owners expect the slowdown in business to continue until the Haj season.

Government officials in Makkah said the lull in trade activity was temporary and added that business would soon pick up. They said plans were already under way to welcome the million of pilgrims expected to start arriving in Makkah in early October – Arabnews