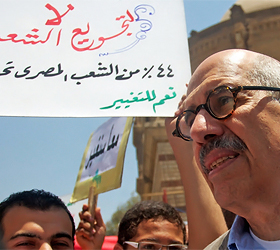 CAIRO: Almost a week after Egyptian Presidential candidate Mohammad El-Baradei called on Egyptians last week to boycott the upcoming parliamentary elections, scheduled for October, it is unclear whether Egypt’s opposition parties will heed his call.

A statement issued on Thursday by the National Association for Change, an opposition umbrella group led by El-Baradei, asked voters to boycott the parliamentary elections for what it dubbed “the absence of any real assurances that they will not be forged.”

The statement went on to say that participation in the elections would grant them “false legitimacy for forging the will of the Egyptian people.”

Jamal Fadel, head of El-Baradei’s campaign in the city of Aswan, said that transparent elections were a precondition for El-Baradei’s participation.

“(El-Baradei) is trying to tell both Egyptians and political parties to boycott the elections,” he told the Media Line. “If there will be no change in the election mechanism before the presidential elections, I believe Dr. El-Baradei will withdraw his candidacy.”

El-Baradei, along with a coalition of opposition parties including the Muslim Brotherhood, have circulated an online petition of seven demands, among which are a more transparent election process with international monitors and the cancelation of Egypt’s emergency laws. Nearly one million Egyptians have already signed the petition, El-Baradei’s website is claiming.

But despite the boycott brouhaha, Egypt’s opposition parties have yet to publicly endorse the El-Baradei boycott.

“The most important test (for El-Baradei) is whether the Muslim Brotherhood decides to participate in the elections,” Elijah Zarwan, a Cairo-based senior analyst with the International Crisis Group told The Media Line. “In the past, the Brotherhood had trouble even registering candidates, after the government prevented them from doing so.”

The Muslim Brotherhood has not officially announced whether it intends to boycott the elections. Zarwan said that legally El-Baradei cannot currently run for president.

“A constitutional amendment introduced in 2007 stipulated that any presidential candidate must be a member of a legal Egyptian political party for at least one year prior to elections in order to run,” he said.

The constitution also requires the candidate to collect 250 signatures from local and national political officials supporting his candidacy.

“In practice, these rules mean the endorsement of the ruling party,” Zarwan said.

The NDP has been chaired by President Hosni Mubarak since 1981. With 317 seats out of the 444 in the People’s Assembly (Egypt’s Parliament), the NDP holds a solid majority.

Dalia Ziada, a political activist and director of the American Islamic Congress in Cairo, said she believed the decision to boycott the elections was wrong.

“This is the easy way out,” she told the Media Line. “To participate in the elections and take the risk of being harassed by the government in order to show the forgeries is the hard way.”

Ziada said she believed the decision to boycott the elections stemmed from the weakness of opposition parties, adding that the opposition was divided along generational lines over the question of an electoral boycott.

“These parties have neither the power nor the money to take the risk,” she said. “Younger opposition members want to participate, whereas the older ones want to boycott.”

Ziada said that opposition leader Ayman Nour, leader of Al-Ghad party and a former presidential candidate, was undecided about boycotting the elections. He announced his ambiguous position following a meeting with El-Baradei, saying he would consult his party members on the matter – Arabnews