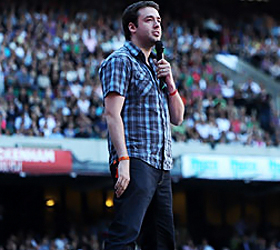 One Show presenter Jason Manford has attacked BBC bosses after comments he made about the treatment of British troops were cut from a charity concert broadcast.

The 29-year-old launched an angry rant while on stage at the weekend’s Help For Heroes concert, blasting the Government for leaving it to a charity to care for injured soldiers. But he was even more furious when he realised his remarks had been cut from the broadcast that went out on air on Sunday evening. He told his followers on his Twitter page: “Just watched my bit at the @HelpforHeroes gig. Can’t believe some s***house edited out the bit about the Government. Free Speech my arse.” He went on: “I said it was disgusting that soldiers get sent to war by a Gov but when they arrive home injured they have to rely on charity. “One in four homeless people are ex-military & a charity like Help for Heroes shouldn’t even be needed if the Gov had balls.” It led to a heated exchange on the social networking site with Liberal Democrat party member Mathew Hulbert telling Manford he ought to be impartial on Government issues as part of his new TV role.

Mr Hulbert tweeted: “I enjoy you on The One Show but you surely realise that becoming a BBC presenter includes the need to follow certain rules.” He added: “Do you ever see Huw Edwards doing that? No. Why? Because he’s professional and remains impartial.”
Manford stuck to his guns, retorting: “I didn’t say it on the One Show I said it at a live comedy gig while doing stand up. Case closed.”
The comic continued: “I’m a presenter in a magazine show, not a news show or a journalistic show, I’m a comedian at an event with an opinion.
“I’m sorry I called someone I don’t know a ‘s***house’, but the rest of my tweets still stand.” But Mr Hulbert later tweeted an apology to the BBC presenter, expressing shock that their exchange had been reported in the media.

He tweeted Manford: “Seems my Twitter debate earlier on has made the national news…how on Earth did that happen? “Feel like I should apologise…but am not quite sure why. Didn’t want to do anything other than raise a concern. “Sorry, I feel bad. I always think of Twitter as being a chat between people, not a news source. I’ve been naive.” – News.sky