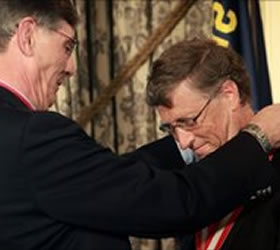 Microsoft founder and philanthropist Bill Gates has been awarded the Silver Buffalo, the highest Boy Scout honour in the US, for his services to youth.

The accolade is for Mr Gates’ work both at Microsoft and for his humanitarian work through the Bill and Melinda Gates Foundation.

As both a cub and scout, Mr Gates achieved the rank of Life Scout.

Speaking at the presentation ceremony, Mr Gates – now said to be worth about $53bn (£34bn) – told the audience that being a scout was a very “positive memory”.

“The merit badges I received: Basket weaving. Wood carving. I was really good at those things. And imagine if I hadn’t learned those things?” he joked.

“Now, I understand that they’ve really updated their merit badge program. They’ve got nuclear science, American business, they’ve got computers. So, it is interesting, I might have to go back and get a few.”

His former scoutmaster, Don Van Wierengen, spoke of his former pupil in a video tribute.

He said that during one scouting event in Seattle, when most boys had been showing off their outdoor skills, Mr Gates had wanted to demonstrate computers.

The Gates’ foundation, which began in 2000, has set up a number of aid projects across the developing world.

The foundation has teamed up the Boy Scouts and the United Nations Foundation for a project designed to supply Africans with insecticide-treated mosquito nets, in a bid to tackle malaria and other diseases.

This year, Mr Gates and fellow billionaire Warren Buffett started the Giving Pledge, which encourages the wealthy individuals to donate the majority of their money to charity.

The Silver Buffalo award was created in 1925. -BBC