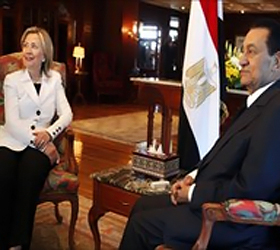 Renewed Israeli-Palestinian peace talks are opening in Egypt, amid concern over the imminent expiry of Israel’s partial ban on West Bank settlement-building.

Benjamin Netanyahu and Mahmoud Abbas will each meet Hillary Clinton in Sharm el-Sheikh before a three-way meeting.

Before the talks began the US secretary of state said Israel should extend its moratorium on West Bank construction, which expires on 26 September.

Palestinians say they will walk out if building on occupied territory resumes.

In remarks on Sunday Mr Netanyahu, Israel’s prime minister, said that some of the thousands of new homes planned for the West Bank might not be built, but hinted that the moratorium on all construction might not be renewed.

“We will not freeze the lives of the residents,” he said.

However, the chief Palestinian negotiator said there could be no “half solutions”.

“If it chooses any kind of settlement building, this means that it has destroyed the whole peace process and it would be fully responsible for that,” Saeb Erekat told the Associated Press.

Another problem facing negotiators is that only one part of the Palestinian territories is represented because the Islamist movement Hamas, which controls the Gaza Strip, opposes the talks.

The BBC’s Jon Donnison in Gaza City says most Gazans seem at best sceptical, whether they are Hamas supporters or not, and at worst feel excluded or are simply not interested in the resumption of the talks.

The series of two- and three-way meetings in Sharm el-Sheikh come ahead of another trilateral meeting scheduled to take place in Jerusalem on Wednesday.

Arriving at the Red Sea resort late on Monday, Mrs Clinton insisted there was hope of a full Israeli-Palestinian peace accord over the course of the negotiations, which resumed in Washington on 2 September after a 20-month break.

But the US, through Mrs Clinton and President Barack Obama, is hoping that both the Israelis and the Palestinians hold back from anything that could interfere with the negotiations – including ending the 10-month moratorium on settlement construction.

Mrs Clinton also suggested that the Palestinians could make a gesture that would help Mr Netanyahu sell an extension to the Israeli public.

The BBC’s Jon Leyne, in Sharm el-Sheikh, says there does not appear much room for compromise, and time is running short.

But it seems unthinkable that these talks would collapse so soon, our correspondent adds, bearing in mind the amount of effort and political capital invested by the US government – BBC