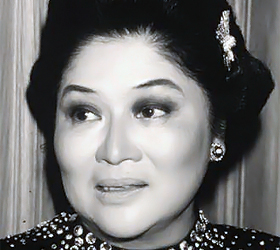 MANILA: Imelda Marcos, the widow of Philippine dictator Ferdinand Marcos, was ordered on Monday by an anti-corruption court to return about 11 million pesos ($250,000) secretly taken from the state’s rice agency in the early 1980s.

The court, known as the Sandiganbayan, found the transfer of funds from the National Food Authority (NFA) to a Marcos account at a private bank in 1983 as “highly irregular and illegal.”

Imelda Marcos, infamous for her collection of jewelry and 1,200 pairs shoes found after her husband was overthrown and forced into exile in 1986, said she could not afford the payment.

“They have taken away everything from our family,” said Marcos, who won a seat in Congress at the May elections.

“The government has frozen all our assets. Where will I get that amount to pay the government back?” she told reporters.

The former first lady has rejected proposals to settle cases of ill-gotten wealth, confident that through litigation she can recover millions of dollars of assets seized by the state.

Ferdinand Marcos ruled for two decades before he was ousted in an army-backed popular uprising in 1986. He was accused of amassing more than $10 billion while in office – Arabnews