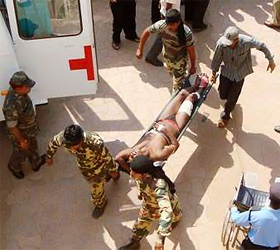 JHARGRAM: A group of Maoists from the Bikash squad  butchered four brothers and their uncle in front of their shell-shocked families in a remote village in Jhargram early Monday morning simply because they had taken part in a CPM rally.
The siblings’ mother and children, aged between two and eight, fell at their feet and pleaded for mercy but the Maoists — three of whom were women — shot the brothers one by one after hitting the 67-year-old woman in the head and kicking her aside.

The incident happened in Chhoto Patina village of Nayagram on the Orissa border. It is 18 km from the nearest police camp. Even police fear to venture into this forest plateau.

According to Jatindra Aguan, the siblings’ father and the only surviving adult male in the family, 17 attackers raided their hut at 5.30am when they were fast asleep. “I had heard their footsteps and sensed trouble. They banged on the door. My son Prasanta answered and went out to meet them. The leader of the team inquired about two local CPM leaders. We said we did not know where they were. My wife realised what was about to happen and fell at their feet and begged for her sons’ lives. The marauders hit her on the head and she fell back, unconscious. They then shot Prasanta in the chest. He died before my very eyes,” the father said, choking on tears.

Little did Jatindra know that the horror was only beginning. While Prasanta lay bleeding to death, the Maoists barged into the room in search of his brothers. Samaresh’s eight-year-old son shivers while narrating his father’s death. “Our room was locked from outside. The attackers shot out the lock and barged in. They dragged my father out even as I pleaded with them. They shot him in the courtyard.

I could only look on,” he said.

Jatindra’s youngest son Rahim was sleeping in a little room on the mud roof. The Maoists riddled him with bullets from below. He tumbled on the courtyard dead. The butchery was not over yet. The other brother Swapan, hiding in another room, tried to escape through the backdoor. But he was spotted and gunned down. He bled for hours as villagers took him to a health centre in Gopiballavpur, West Midnapore, and then to Topsia, where he died.

Eight members of the Maoist team then raided the house of Jatindra’s brother Amrit who had participated in a CPM rally on Sunday. “They dragged him out and killed him,” said relative Alpana – Timesofindia