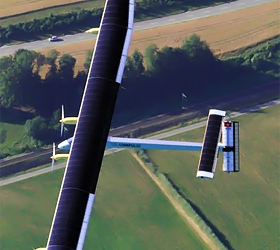 GENEVA: The team which successfully conducted a round-the-clock flight powered by the sun, Solar Impulse, said Tuesday it is planning three test flights across Switzerland as it ramps up preparations for long-haul journeys.
“Solar Impulse HB-SIA, the solar-powered aircraft… will undertake three flights, Payerne-Geneva, Geneva-Zurich and Zurich-Payerne, with no fuel,” said the team in a statement.
“In so doing they will, maybe, contribute to opening a new era of aviation.”
The plane would first take off from western Switzerland’s military airbase of Payerne and land at Geneva international airport.

From Geneva, it would then take off for northern Switzerland’s Zurich international airport.

The date for the domestic flights has not been confirmed, but a spokeswoman said it would take place in September.
The flights would train the team to work outside their bases as well as to collaborate with international airports.
“The objective is to prepare the long-distance flights scheduled for next year,” said the team.
The Solar Impulse project was set up seven years ago with the aim of ocean crossings, transcontinental and round the world flights by 2013 or 2014.
During its first successful 24-hour flight in early July, it circled the surroundings of Payerne military base – Geo.tv