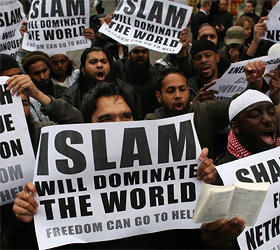 LONDON: Christians in Europe must have more children or else the continent would become Islamised, said a Vatican official who predicted that Islam would “sooner rather than later conquer the majority in Europe”.

Italian Father Piero Gheddo said the poor birth rate among Europeans coupled with waves of Muslim immigrants could lead to Europe getting dominated by Islam.

“The challenge must be taken seriously,” Daily Telegraph Tuesday quoted Father Gheddo of the Vatican’s Pontifical Institute for Foreign Missions as saying.

He said: “Certainly from a demographic point of view, as it is clear to everyone that Italians are decreasing by 120,000 or 130,000 persons a year because of abortion and broken families – while among the more than 200,000 legal immigrants a year in Italy, more than half are Muslims and Muslim families, which have a much higher level of growth.”

“Newspapers and television programmes never speak of this. However, an answer must be given above all in the religious and cultural fields and in the area of identity.”

The official held Christians responsible for failing to live up to their own beliefs that led to the creation of a “religious vacuum” being filled by Islam.

He said Islam would “sooner rather than later conquer the majority in Europe”.

“The fact is that, as a people, we are becoming ever more pagan and the religious vacuum is inevitably filled by other proposals and religious forces.”

Gheddo went on to say that Christians were also making themselves vulnerable to secularists’ attacks.

He stated that when “religious practice diminishes in Christian Europe and indifference spreads, Christianity and the Church are attacked”.

“If we consider ourselves a Christian country, we should return to the practice of Christian life, which would also solve the problem of empty cradles.”

A few months back, a Czech cardinal had also blamed lapsed Catholics for Europe’s Islamisation.

Cardinal Miloslav Vlk had said Muslims were well placed to fill the spiritual void “created as Europeans systematically empty the Christian content of their lives”.