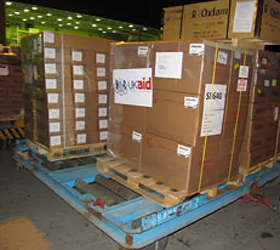 LONDON, Sept 7 (APP)- The UK will intensify efforts this week in critically affected south Pakistan to help avert the risk of a public health crisis.  That would include providing urgently needed clean drinking water and sanitation for hundreds of thousands of people, the UK International Development Secretary Andrew Mitchell announced in the Parliament on Tuesday.

Outlining some of the aid programme, he said UK Government will start emergency production lines in factories in Lahore and Karachi, to produce 2,155 hygiene kits per day and 5,300 water containers per day for two weeks.
“Trucks will leave the factories as soon as they are full to distribute the urgently needed items to people in Punjab and Sindh, to help stop the spread of water-borne diseases,” he informed the fellow Parliamentarians.
Mitchell stated the UK Government also help set up an emergency field operations and coordination base camp in the middle of the worst flood affected area near Sukkur to house up to 72 relief workers, from a range of agencies including the UN and NGOs, with the International Humanitarian Partnership.
The UK will also charter three more flights into Pakistan. The flights from Nairobi, Beijing, and the East Midlands will be packed with vital aid, including water tanks large enough to supply entire villages plus 134,818 water containers (jerry cans and buckets) for families to store clean water, 34 million water purification tablets making 340 million litres of safe drinking water, 3,016 shelter kits providing protection from the elements for more than 3,000 families, 12,525 blankets, and 4,510 sets of basic cooking utensils.
Speaking in the lower House of Commons  said: “The floods in Pakistan are extraordinary and demand an extraordinary response. That’s why we are taking these inventive approaches to set up an emergency production line and scouring the globe to fly in such huge quantities of urgently needed items.
“Some parts of southern Pakistan are still under four feet of water, which won’t drain away for some time due to heavy clay in the soil.  Unless people can access safe water and sanitation there is a real threat of a public health disaster from waterborne diseases.”
The new supplies from the flights and the production lines will be distributed by Save the Children, IOM, UNICEF, and other relief agencies.
The latest contribution comes to about 2.5 million pounds sterling (approx 330 million rupees) out of the 64 million pounds sterling (approx 8.5 billion rupees) already committed by the UK Government in response to the flood crisis in Pakistan.
The monsoon floods in Pakistan, which began almost six weeks ago, have affected a reported 18 million people, and millions forced from their homes by rising waters.
The UK was one of the first countries to respond to this crisis.  In addition to the commitment by the Government, the UK public has donated a further 47 million pounds sterling  (approx 6.2 billion rupees) out of their own pockets to the Disasters Emergency Committee (DEC). This will help millions of people in Pakistan access safe drinking water, toilets, emergency shelter, health care, and other essentials.
Earlier on  September 1, the UK Deputy Prime Minister Nick Clegg announced how 9 million pounds sterling (1.2 billion rupees) of UK funding will be spent in Punjab and Sindh via Oxfam, Save the Children, and Concern, providing safe drinking water for hundreds of thousands of people, toilets for use by around a quarter of a million people, emergency shelter for 30,500 families; 650 new born baby kits, and more.
This comes on top of five Royal Air Force and four chartered flights which have already brought in emergency shelter kits for 12,000 families; 3,500 tents; 50,000 blankets, 1.7m water purification tablets; and 24,000 water containers.
To help repair Pakistan’s infrastructure, DFID has accelerated a 10million pounds sterling (1.5 billion rupees) project to provide new bridges to replace some of those washed away by the floods. Ten bridges are on a ship from the UK, and two more are being trucked from Karachi up to Khyber Pakhtunkhwa.
The International Humanitarian Partnership base camp will provide relief workers with a place to work and sleep, plus meals and access to water and sanitation facilities. Members of IHP include the Governments of UK, Sweden, Norway, Denmark, Holland, Estonia, and Finland – APP
Twitter Facebook Google + Linkedin Comments