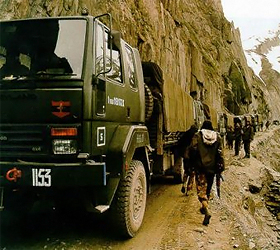 BARASAT: The Army had to be called out to quell communal clashes that erupted at Deganga in North  24-Parganas on Monday night. Nearly 30 people, including two policemen, were injured in the violence that continued till Tuesday morning.

The last time the Army was out in Bengal was when rioting broke out in parts of Kolkata over the writings of Taslima Nasreen in November 2007.

The flare-up at Deganga was sparked by a stray comment when a religious procession was passing by a disputed plot in an area with mixed demography. Officials at Writers’ Buildings said the Army had to be called out mobs rampaging through streets pelted stones at the police and could not be brought under control by personnel of the Rapid Action Force, the Central Reserve Police Force and the Border Security Force.

“We did not want matters to get out of hand and requisitioned the Army. Soldiers have started route marches in the area and things have started returning to normal,” a senior Army official said.
Deganga is about 35 km from Kolkata and close to the India- Bangladesh border. “Nearly 200 Army personnel have been deployed in the area to assist the civil administration in bringing about peace in the area,” a defence ministry spokesperson said – Timesofindia