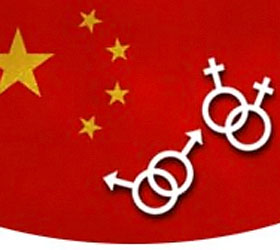 SHANGHAI — The rush hour crush had just subsided on a stifling recent summer evening, when I stepped into the subway car on the circular line that serves the central city as part of the brilliant public transportation system Shanghai has built in what seems like no time at all.

Hot and bothered from hours of photographing on the street, I was relieved to find an empty seat by the door and promptly collapsed into it, savoring the refreshing gusts of air-conditioning.

A moment passed before I looked up and paid any attention to the other passengers. As the lone foreigner usually in situations like these, I had become accustomed during my summer stay in the city to finding all eyes focused on me. This time, though, commuters had something further out of the bounds of their daily commute to focus on.

Seated directly opposite me, two teenage girls were kissing in an unmistakably romantic way. They appeared to be no older than 17. One of them, strong of build and with short hair, was dressed and coiffed in a masculine style. Her longhaired companion, who was dressed in a pretty pastel skirt, was the picture of classic, old-school sweet 16.

I tried to do what I immediately noted few of my fellow passengers could accomplish: not stare. But as I looked up from time to time, it struck me that among other things, amid all of the sustained touching, billing and cooing, there was willful, if mild, provocation taking place before my eyes.

The statement that was being made seemed to say: “This is a new age, and people of our generation are free to do as we wish in our love lives, so get over it.”

It has become a truism to observe that contemporary China is the scene of the most rapid, transformative change of any large country in the world today. Usually, discussion focuses on industry and trade, or on China’s conquest of new markets in faraway regions, or perhaps most common of all, on the breathtaking roll-out of infrastructure, like the subway I was riding on, which puts its ancient forerunner in New York, where I live, to shame.

The scene unfolding before me was a jolting reminder that the nuts and bolts transformation of China is the least of it. As this society rapidly grows richer, its social fabric and mores have been changing in ways far more dramatic than even the physical landscape, and sexual choice and expression are arguably in the leading edge of this upheaval.

Places like Shanghai, an island of particular affluence, provide a privileged bird’s-eye view of the changes under way. When I lived here between 2003 and 2008, the public emergence of gay men became an increasingly evident fact of daily life. For the most part, at least as far as an anecdotal sense of things could confirm, though, open same-sex relationships among females here lagged far behind.

Returning to Shanghai each summer since then has sharpened my awareness of incremental social change. Last year, I noticed apparently lesbian couples for the first time, in any substantial number. I have vivid memories, in particular, of dinner one night in a favorite restaurant, where two nearby women in their late 20s and dressed as professionals engaged in ever more passionate embraces.

There were other scenes observed like this that I tucked away and made little of until I returned in June and immediately began encountering examples of public intimacy between women. I also began noticing the far greater prevalence of what I’ve thought of as masculine styling by women, which Chinese friends say parallels the emergence of what they call a unisex style that has become very popular among young men.

Had something big changed here in such a short period of time? “During the recent 10 years we have seen the opening up of many previously forbidden or repressed voices around sexuality, and homosexuality is one of them,” said Lucetta Kam, an associate professor at Shantou University, who specializes in gender studies. As causes she cited the influence of the Internet, which “has given rise to social networking of people with similar experiences, aspirations and thinking.”

Ms. Kam also cited the easing of “ideological restrictions,” which tracks the rapid decline of ideology in most every aspect of Chinese life. Most interestingly for me, though, she mentioned the “sudden media exposure of lesbian and gay people” in prime-time television in China.

According to Feng Hui, an 18-year-old student and self-described lesbian whom I met at a shopping mall, a critical breakthrough occurred in 2005 with the victory of Li Yuchun, the 21-year-old winner of China’s “Super Girl” contest, a discontinued “American Idol”-like talent show. Throughout Ms. Li, who has sidestepped questions about her sexuality, wore her hair short and dressed in boyish fashions. Moreover, she won singing love songs written for men about women.

“Super Girl” had more than 400 million viewers, and its balloting has been called the largest voting exercise ever conducted in China. After Ms. Li’s victory, the authorities denounced the show as vulgar, but she has gone on to prominent roles in advertising and cinema here, and has stuck to her style.

“Li Yuchun is the mother of unisex in China, and her comfort with herself inspired a whole generation of women like me,” said Ms. Feng.

Another researcher on sexuality here, Zhu Jianfeng, of Fudan University, was more reserved about the role of Li Yuchun but agreed that things were changing fast. “The society has become much more accepting than in the past, and fewer people will challenge you and ask, ‘How could you live that way?”’

The last barrier remains the family, she said. “People can be open about their sexuality with their friends, but within the family, it is still uncommon.” – Nytimes