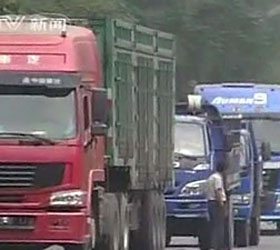 Thousands of lorries are stuck in a 75-mile traffic jam on a motorway heading towards Beijing.

More than 10,000 lorries, mainly carrying coal, are stuck in the northeastern Chinese region of Inner Mongolia, according to officials.

The motorway going towards China’s capital and the neighbouring province of Hebei are now more like a car park than a major road, state TV reported.

The traffic snarl-up began on Tuesday after local restrictions were enforced in Hebei.

But the road further into Hebei is getting quieter, offering hope to the drivers stuck in Inner Mongolia.

China is the world’s top producer and user of coal, and Inner Mongolia has large reserves.

A similar traffic jam that lasted nine days on the Beijing-Tibet Expressway was only cleared a little over a week ago.

While China is spending billions of pounds on infrastructure such as roads and railways, it is still struggling to keep up with the demands of its booming economy and traffic jams are increasingly common – News.Sky