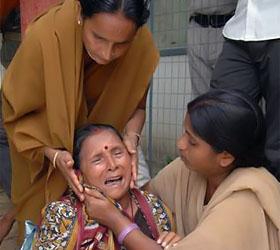 Superintendent of Police, Lakhisarai, Ranjit Kumar Mishra said a body found in the Simra Tari Sringirishi dam under Kajra police station in the district had been identified that of one of the kidnapped policemen — Lucas Tete.

Mr. Mishra said the body of Tete was found lying in a pool of blood on a road in the forests surrounded by hills.

A leaflet too has been recovered from near the body in which Maoists claimed to have killed the havildar and threatened that the other three held captive by them would also meet the same fate if the state government failed to release eight of their jailed colleagues, official sources said.

Self-proclaimed Maoist spokesman Avinash had yesterday claimed to have killed SI Abhay Yadav after the expiry of the deadline set by them for a government response to their demand by four p.m.yesterday.

The body of Abhay has not been located and neither was there any official confirmation.

Intense search operations continued in the hilly and forest areas in Dharhara, Kajra and several other places in Bihar’s Munger, Jamui and Lakhisarai districts, he said.

Mr. Dwivedi said the police had not yet found the body of Abhay Yadav. Maoists claimed to have thrown his body in the forests under Kajra police station in Lakhisarai district.

Chief Minister Nitish Kumar has called an emergency meeting at his official residence this noon.

Avinash earlier telephoned media offices here reiterating his claim of killing Yadav, the Manikpur Station House Officer, and renewed his readiness for holding talks with the state government for freeing the hostages in exchange for eight of the ultras lodged in different jails in Bihar.

“We know harming anybody is inhuman, but we are left with no other option than taking the extreme step… If the government is really interested in talks, it should halt the strike and pave way for initiating talks,” Avinash said.

The Bihar Chief Minister had yesterday offered talks with Maoists.

The arrested Maoists were being looked after by the state government properly, Kumar had said adding, “We expect a similar treatment with the policemen.”

The Maoists had yesterday warned that the remaining three hostages would be killed if the state government did not accept their demand for release of their jailed colleagues——Jai Paswan, Vijay Chourasia, Prem Bhuian, Pramod Barnawal, Ramvilas Tanti, Ramesh Tirki, Arjun Koda and Rattu Koda.