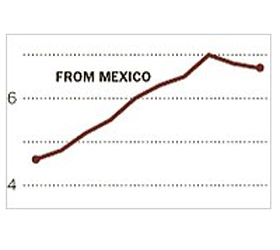 The number of illegal immigrants in the United States, after peaking at 12 million in 2007, fell to about 11.1 million in 2009, the first clear decline in two decades, according to a report published Wednesday by the Pew Hispanic Center.

The reduction came primarily from decreases among illegal immigrants from Latin American countries other than Mexico, the report found. The number of Mexicans living in the United States without legal immigration status did not change significantly from 2007 to 2009. Some seven million Mexicans make up about 60 percent of all illegal immigrants, still by far the largest national group, the Pew Center said.

The report is based on census data from March 2009, the most recent census sample that is detailed enough for Pew demographers to estimate the statistically elusive population of illegal immigrants. The figures show that more than a year of recession in the American economy, coupled with intensifying immigration enforcement at the Southwest border and in workplaces around the country, brought a reduction of at least 900,000 illegal immigrants.

But the figure that may be most sobering to all sides in the increasingly contentious immigration debate is the estimate that more than 11 million illegal immigrants remain here. The Pew report shows that despite myriad pressures, there was no mass exodus of those immigrants to their home countries, especially not to Mexico.

Instead, the report confirms earlier findings by American and Mexican demographers that the flow of Mexicans coming in to the United States illegally to look for work had slowed sharply.

While the hottest immigration debate has taken place in Arizona over the last two years, that was not the state with the largest decrease in illegal immigrants from 2007 to 2009, according to the Pew report.

The Pew Hispanic Center is a nonpartisan research organization in Washington that does not advocate political positions on immigration. The report was written by Jeffrey S. Passel, senior demographer, and D’Vera Cohn, senior writer at the center. It does not try to weigh the respective roles of immigration enforcement and of economic factors like high unemployment in the falling numbers of unauthorized immigrants — the term the report uses for foreign-born residents who do not have some form of legal immigration status.

The Pew report covers the first year and a half of the Great Recession, which economists say began in late 2007. It also covers a period of intensified immigration enforcement operations, which were initiated by the Bush administration and have continued, with some different tactics, under President Obama.

Other researchers said the Pew figures on illegal immigrants were consistent with estimates by the Department of Homeland Security, with previously reported trends in census data and with figures from the Mexican census agency. Pia M. Orrenius, senior economist at the Federal Reserve Bank of Dallas, said that Mexican census data showed a 67 percent decline in the outflow of migrants from 2006 to 2009, while showing no great increase in Mexicans returning home.

“They are settled here,” Ms. Orrenius said. “It is going to take more than a business cycle for them to move back to Mexico.”

She also said that federal enforcement had been concentrated at the border. “Our enforcement policies are targeted toward stopping inflows,” Ms. Orrenius said.

As the border has become harder to cross, the cost of hiring smugglers has soared in recent years, while far fewer jobs await migrants in the United States. Mr. Passel, the Pew demographer, said, “The cost of getting in compared to the payoff from employment is changing the decisions of many potential migrants.”

The Pew report does not explain why the numbers of immigrants from Central and South America and the Caribbean fell more sharply, but it finds that immigrants who are returning to those countries “may have increased.”

Demographers said those migrants were more likely to be first generation, with less money, thinner support networks in this country, and far less experience than Mexicans have with the increasingly perilous illegal border crossing.

The passage across Mexico has also become very dangerous. Last month, the bodies of 72 migrants were discovered in Tamaulipas, in northern Mexico, and Mexican authorities said they were killed by drug traffickers – Nytimes