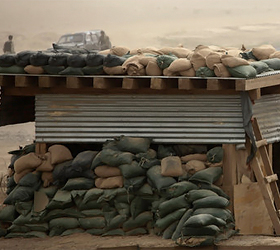 MEHLAJAT, Afghanistan — When the governor of Kandahar Province came to this town, freshly liberated on Sunday from the Taliban, his armed entourage appeared to outnumber what was left of the population.

“Don’t worry,” Gov. Tooryalai Wesa told the few elders who ventured out of their homes. “The Taliban are gone. Our security forces will not leave you alone. You’re safe now.”

For the moment, this farming community of about 60,000 people on the edge of Kandahar City looked more like a ghost town, doors closed and windows barred, with hardly anyone on the streets. Laced with booby-traps and hidden bombs, the wheat and corn fields nearby were empty of workers.

The tempo of operations throughout the districts surrounding Kandahar has been steadily increasing in recent weeks, but nowhere more suddenly than in this town and the surrounding Dand district.

While many operations in Afghanistan are now joint ones between NATO and Afghan forces, in most of them, the phrase “Afghan-led” is little more than a fiction. This was an exception.

While American commanders said the operation pointed the way to Afghanistan’s future, the outcome — a town filled with bombs and booby traps but devoid of most residents or fighters — showed just how difficult it would be to secure the area and win over residents. The reasons the Afghans took the lead seemed to have more to do with local politics than coalition building.

When Muhammad Rasol, the police chief of the Daman district, to the east of the city, and three officers were killed by a suicide bomber on Aug. 18, Kandahar’s powerful provincial assembly chairman, Ahmed Wali Karzai, was furious and complained to his brother, President Hamid Karzai, American officials said.

President Karzai issued an unprecedented decree giving the powers of commander in chief to the governor of Kandahar Province, Mr. Wesa, and ordering him to convene an urgent “military shura” to discuss a response. Mr. Wesa is a close ally of the president’s brother.

Mehlajat has been infamous as a staging area for Taliban assassinations, and in just the previous three weeks, 10 people had been killed here. A local Taliban court had issued death sentences against anyone suspected of links to the government; four of the victims were hung from electricity poles and another from a tree. Two truck bombs last year and many of the assassinations in Kandahar, now taking place at the rate of two or three a day, have been attributed to members of the Taliban from here.

The governor’s military shura decided to hit Mehlajat, and do it quickly. The operation was led by Col. Abdul Razaq, a controversial figure and an ally of Ahmed Wali Karzai, who leads a unit of the Border Police in the province. It also included army forces and other police units, all under the governor’s ultimate command.

The Afghans informed NATO commanders that they were going ahead on two weeks’ notice — a remarkably short time for a major operation involving what the Afghans said were 1,700 police officers and soldiers.

“It came about rather quickly,” said Lt. Col. Victor Garcia, deputy commander of the United States Army’s Task Force Raider, which backed up the Afghans. “It was a happy surprise.”

It was not a surprise to the Taliban, however, who had either fled or hid by the time the operation started, local residents said. Other than two policemen wounded by a roadside bomb, there were no casualties. “We blocked all ways in and out for them,” said Colonel Razaq, who added that the authorities had picked up 100 people suspected of being Taliban fighters.

A Taliban commander, contacted by telephone, confirmed that some Taliban fighters had been captured while trying to flee, but he said most had gotten away. He said the Taliban had made a decision not to defend the area but to pull out and resort to hit-and-run attacks. The Taliban used the same tactics when United States Marines moved into the district of Marja in neighboring Helmand Province this spring. That area remains insecure.

In Mehlajat, the Taliban had left a unit behind that was expert in laying roadside bombs. The unit would wait until security forces had settled into their posts and then begin guerrilla-style attacks, the commander said.

Frightened villagers fled Mehlajat in the opening days of the operation, piling belongings and children onto tractors and heading for the comparative safety of Kandahar. They complained that the government and NATO forces were searching houses and arresting people and that the Taliban were planting mines.

“The government is unable to bring security to the regions and the Taliban are killing people and planting mines,” said a taxi driver, Abdul Wali, who was evacuating his family last Thursday. “Life is terrible.”

Governor Wesa’s visit was an appeal to the residents to come back, though few emerged to hear that. He addressed three elderly men who had cautiously come out to listen.

“The area is now cleared of Taliban, and those families who have left their homes because of fear and insecurity can come back,” the governor said.

The governor promised that an American mine-clearing team would come soon, to hunt for roadside bombs and booby traps; there are so many planted on the roads and lanes that farming has come to an almost complete stop.

“Thank God there were no civilian casualties at all,” said a farmer, Nida Muhammad, 40. “We were scared at the start of the operation that there would be huge fighting and bombing. There were lots of Taliban but they all left the area.”

“Don’t leave us to the Taliban,” Mr. Muhammad implored. “If the Taliban come again, we will face serious retaliation for being helpful to the government.”

In Kandahar, residents who had fled Mehlajat said they would bide their time before returning. “The Taliban were everywhere but when the operation began, they just disappeared,” said Fazli Ahmad, 35, a farmer who left with his wife and three children. “They just planted more mines and left.”

American Special Forces soldiers set up their base inside the house that the Taliban had used as their court.

Colonel Garcia said American and Afghan forces would stay to make sure the area remained clear of Taliban. “We’re very proud of our Afghan partners,” he said. “They came together and they led the way and the U.S. forces provided support.”