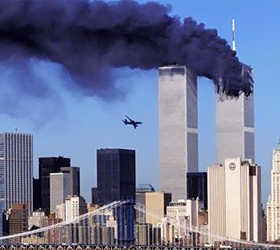 The September 11 attacks represented the declaration of war by a new type of enemy, Tony Blair says.

He claims that he quickly realised the implications of the suicide bombers crashing aircraft into the World Trade Centre and the Pentagon, having heard the news while preparing to deliver a speech to the TUC in Brighton. Mr Blair says he understood the new war was ideological, but admits that at the time he did not fully understand the history of Islam. He admits he underestimated the “hold of this extremism”.

Only the future will tell if it would have been better to fight the war using military intervention or “soft power”.

But he insists he followed his instinct and convictions, and would not have changed his decisions on Iraq or Afghanistan even if he had known the length of the campaign.

“To try to escape conflict would have been a grave mistake, political cowardice.”

Mr Blair also discloses that he once came close to authorising the shooting down of a commercial flight heading to London, after it lost radio contact. But after the deadline passed he decided to hold fire, and once the pilot re-established contact he had to sit down and thank the heavens.