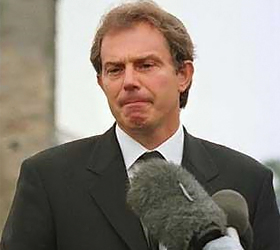 Diana, Princess of Wales was down to earth, charming and intelligent, but also stubborn and prone to be over-emotional, says Mr Blair.

He recalls meeting the Princess at Chequers in July 1997, the month before she died, saying he felt an uneasiness about her relationship with Dodi Fayed but could not put his finger on why. He says she did not appreciate him broaching the subject with her.

“We were both, in our own way, manipulators” — good at grasping the feelings of others and instinctively playing on them.

Giving his first account of what happened on the night she died, Mr Blair says he was woken at 2am on Aug 31, 1997 by a police officer at the end of his bed, who told him that Diana had been badly injured.

He knew from the beginning that her chances of survival were poor, and was told of her death at 4am. Mr Blair says that, without wishing to sound callous, he wanted to “manage” the situation and shape the public grief that would follow.

It was difficult because there were no conventions for the death of a person such as the Princess of Wales. He prepared his now famous “People’s Princess” speech on the back of an envelope with the help of Alastair Campbell

He felt that the royal family’s lack of response to the Princess’s death was dangerous for them in the face of a massive outpouring of public grief and felt a duty to protect the monarchy from itself.

He says he did his best, even though some members of the Establishment did not like who he was and what he represented. Mr Blair felt that he could not be direct with the Queen about the gravity of the situation so he spoke to the Prince of Wales, who agreed with him and said he would tell the Queen that Mr Blair thought that she should make a public statement. She agreed.

After the funeral, Mr Blair spent the weekend at Balmoral, where he felt a little uncomfortable, and could not have got through it with out the stiff drink that was served up before dinner.

He spent a lot of time alone with the Queen and says it was hard for her to accept the public perception that he was telling her what to do. He did not know the Queen well then and they were both ill at ease with one another. “I spoke, with passion, of the need to accept life’s lessons. I worried she found me presumptuous — she was a little haughty.”

But at the end of the weekend the Queen accepted that she had learned some lessons.

A year later he spent a weekend at Balmoral with Cherie, who wanted to bring the children, but he told her this was out of the question. They had a barbecue where the Royal family served the food and did the dishes. “You think I’m joking? You’re sitting in front of your empty plate and suddenly, the Queen clears it away for you.” Mr Blair says he spoke to Prince William who was still angry about his mother’s death. He believes he felt burdened by the “prison of hereditary tradition” – Telegraph