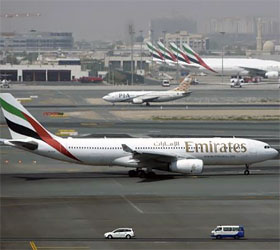 Nedumbassery (Kerala): About 364 passengers onboard the Kochi-bound Emirates flight (EK530) from Dubai had a miraculous escape after encountering a violent mid-air drop on hitting an air pocket over Goa. Twelve persons suffered minor injuries. The plane landed safely at the Cochin International Airport here at 8.50 a.m. on Sunday.

According to airport officials, the Boeing 777 aircraft that took off from Dubai at 4 a.m. struck a Clear Air Turbulence about 60 nautical miles away from Kochi and descended abruptly to about 4,000 feet from an altitude of 18,000 feet. Passengers not wearing their seatbelts were hurled around and the cabin baggage fell.

As the aircraft bounced back from the sudden plunge, they hit the jet’s ceiling and window panels before crashing back to their seats. The plane’s interiors too were damaged. As the plane shook violently, oxygen masks dropped, while some passengers even slammed into the luggage bins, said one passenger.

“It was a total free fall. People were startled and suddenly, I could hear every one screaming and crying and I thought the plane was going to crash,” recalled Shibi, who was on the flight with his wife and two-year-old daughter.

A list of injured passengers handed by the airport included five Brazilians. After the plane landed here, the authorities assessed the damage, while a team of doctors examined all passengers who were shocked and bruised – Hindu