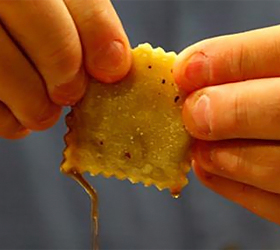 A chef in Texas has created what he claims is the world’s first recipe for deep-fried beer.

The beer is placed inside a pocket of salty, pretzel-like dough and then dunked in oil at 375 degrees for about 20 seconds, a short enough time for the confection to remain alcoholic.

When diners take a bite the hot beer mixes with the dough in what is claimed to be a delicious taste sensation.

Inventor Mark Zable said it had taken him three years to come up with the cooking method and a patent for the process is pending. He declined to say whether any special ingredients were involved.

His deep-fried beer will be officially unveiled in a fried food competition at the Texas state fair later this month.

Five ravioli-like pieces will sell for $5 (£3) and the Texas Alcoholic Commission has already ruled that people must be aged over 21 to try it.

Mr Zable has so far been deep frying Guinness but said he may switch to a pale ale in future.

He said: “Nobody has been able to fry a liquid before. It tastes like you took a bite of hot pretzel dough and then took a drink of beer.” Mr Zable previously invented dishes including chocolate-covered strawberry waffle balls and jalapeño corndog shrimps.