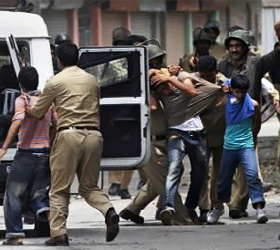 SRINAGAR: Fed up with repeated strikes by separatists in Kashmir Valley, shopkeepers are up in arms against protestors, who are tasting their own bitter pill as locals are attacking them with stones.

Clerics have also started making fervent appeals from mosques to open shops and restore normalcy in violence affected areas.
An incident of clash was recently reported from Peerbagh in Budgham district of Central Kashmir – the scene of violent protests during the last few weeks.
As separatists and their goons reached the area to enforce the strike, they were greeted with stones. Local shopowners showered stones on these rowdy elements who tried to force them to close down their establishments.
The police could not do anything to quell the locals and shopkeepers as securitymen were outnumbered.
These shopkeepers and locals reached the police station later and filed an FIR against 10 people of neighbouring Nabir Gund village holding them responsible for spoiling peace and threatening the locals.
Far away in Anantnag in South Kashmir, an appeal for opening of shops was made as people were facing lot of hardships on account of frequent strikes during the Holy month of Ramzan.
The separatists’ strike calls have hit the economy and at many a places people have been seen selling off their belongings at distress rates.
The business of shopkeepers has suffered a lot as the turmoil not only brought tourism to an abrupt halt but also forced establishments to remain closed for nearly two months now.
In Ompura area in central Kashmir, there have been instances of exchange of hot words between locals and anti-social elements when businessmen were forced to shut down their shops.
In Meehama Pulwama in South Kashmir, four men were beaten up by locals three days back when they were trying to enforce a strike in the area.
Senior police officials said people were voicing their concern and police was only intervening to prevent situation from turning worse.
These issues are not limited to villages only. In Natipora area of the city, anti-social elements ransacked a bakery shop. The owner’s only fault was to supply fresh traditional Kashmiri bread in his area. The incident triggered resentment among the public against the separatist agenda.
“It is heartening that people have started coming out to register their protest against the separatists though such protests are scattered,” said a senior police official – Timesofindia