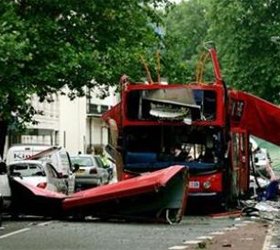 (Reuters) – Britain faces a new wave of attacks from poorly trained but highly motivated homegrown militants, as the al Qaeda threat shifts from big, sophisticated bomb plots to acts by individuals, a report said on Friday.

A shift in al Qaeda tactics, the growing radicalization of Muslims in prisons and a foreign policy that “serves to focus alienation and resentment,” was fuelling the threat, the study by the Royal United Services Institute think tank argued.

“The conditions are all there for a series of attacks that could begin at any time,” said the report, co-authored by the Director of RUSI, Professor Michael Clarke, who has advised the government on security matters.

There have been 20 significant Islamist plots against Britain since 2000. Only one has been successful, the July 2005 London bombings by four young Britons which killed 52 people. More than 230 people have been jailed for planning attacks.

Britain is on its second highest threat level of “severe,” meaning a terrorist attack is considered to be highly likely, and the RUSI report said Britain had more to fear than any other Western country from homegrown terrorism.

However, the report said both the origin and nature of the threat had changed. Previously, Osama bin Laden’s “al Qaeda Core” on the Afghanistan-Pakistan border had been the instigator of nearly all the major plots in Britain.

Now, groups such as al Qaeda in the Arabian Peninsula (AQAP), which took responsibility for a failed plot to blow up a U.S. airliner on Christmas Day, have become heavily involved.

To the fore is AQAP’s American-born cleric Anwar al-Awlaki, linked to the U.S. army psychiatrist who shot dead 13 soldiers at Fort Hood, Texas in 2009, as well to UK militants.

This shift has brought a change in tactics and targets, away from the dramatic, large-scale attacks on air travel planned by well-trained leaders operating extensive cells.

The report said Awlaki and other new leaders were happy to send out individuals with rudimentary training, targeting major sporting events and hotels, while suicide terrorists were also likely to attempt more assassinations of specific individuals.

“Eventually, it is reasoned, one of them will be lucky enough to succeed in a major way against high-profile targets in Western countries,” the report said.

The report said security services also faced a growing threat from a rising number of Muslims radicalized in British prisons, which it said could produce some 800 “potentially violent radicals” over the next decade.

Meanwhile some of those convicted of involvement in terrorism plots who had received short jail terms would also be released and were likely to remain committed to their cause.

“British security services are acutely aware of the possibilities for a wave of individual, random attacks against different targets,” the report concluded.

“Attacks on ‘crowded places’ are near the top of the government’s risk rankings over the next five years.” – Reuters