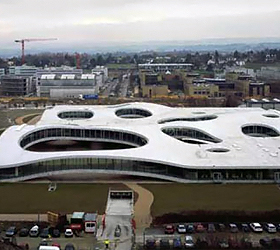 So says architect Ryue Nishizawa, one half of SANAA, the creative partnership he shares with Kazuyo Sejima, about the “Galapagos Syndrome” — the term used to describe Japan’s relative isolation from global trends and the resulting incompatibility of things Japanese with the rest of the world. While the characterization may be apt for Japan’s mobile phone industry, in the world of contemporary architecture Japan is currently at an unprecedented peak of global acclaim and influence.

In the spotlight are Sejima and Nishizawa. For over 15 years, their collaboration as SANAA has been exceptionally fertile, producing a coherent body of work revealing a lucid vision of architecture as environment, and characterized by a spare, limpid beauty. Already the recipients of numerous honors, earlier this year SANAA was awarded the 2010 Pritzker Prize, popularly known as “Architecture’s Nobel.”

This award came hard on the heels of the appointment of Sejima to direct the Venice Biennale’s 12th International Architecture Exhibition. Running from Aug. 29 to Nov. 21, this event is widely seen as the world’s most important architecture festival, and the choice of director and theme are bellwethers of global architectural culture.

This is the first time that the directorship has been awarded to a woman, and to someone outside the European and North American sphere. As Vincenzo Petrone, the Italian Ambassador to Japan, noted with conviction at a press conference recently: “Tokyo is, at present, the world capital of architecture.”

SANAA was founded in 1995, when Sejima invited Nishizawa, more than 10 years her junior, to join her in a creative partnership. Since then, their work has encompassed a wide range of building types, including private and collective housing; retail buildings, such as the ethereal Christian Dior Building in Omotesando, Tokyo; and educational structures, such as the undulating Rolex Learning Center in Lausanne, Switzerland. There is great diversity of space, form and occupation across these projects, yet all have an unmistakable clarity of thought and consistency of expression.

But it is in the aesthetically rigorous domain of creating facilities for contemporary art that SANAA’s sensibility seems most attuned. The 21st Century Museum of Contemporary Art in Kanazawa, completed in 2003, integrates landscape and building, shelter and openness, public gathering and private retreat into a masterfully tuned set of spaces for art, bounded within a perfectly round glass ring. At the New Museum on the Bowery in Manhattan’s gritty Lower East Side, the spaces are piled vertically, and wrapped on all sides with coarse aluminum mesh.

Completely different in feeling yet sharing a common logic, each building appears to partake of a global contemporary sensibility while remaining eloquently expressive of its respective locale. If the museum in Kanazawa is like the trembling brim of a cup of cold sake, the museum at the Bowery is like the foamy head on a pint of microbrew.

At the heart of SANAA’s vision is an understanding of architecture as arising out of human interaction, both with each other and with their environment. This complements the theme for the Venice Biennale, “People Meet in Architecture,” a title that arose out of conversations between Sejima, Nishizawa and longtime supporter Yuko Hasegawa, chief curator at the Museum of Contemporary Art Tokyo.

SANAA’s interest in the question of “use” sounds reminiscent of the old Modernist concept of “function.” “Form follows function!” went the famous Modernist refrain. But the two are very different. Modernist thinking typically saw functions as well-defined and predictable — a kitchen, an operating theater — and held that the spatial design should be determined by this. By contrast, SANAA seeks to provoke unexpected uses and encounters via the architecture itself.

“We are interested in how people use space,” Nishizawa explains. “Design is a kind of creation, but use can also be seen as a kind of creation. ‘To use’ is not just simply ‘using up.’ Users also create something while using the space.

“We want to create spaces that people feel that they want to use,” Nishizawa continues. “There is a subtle distinction here. We’re not trying to make architecture that is ‘easy to use’ or ‘convenient.’ We’re trying to create comfortable spaces, spaces that are enjoyable to be in. But a convenient space is not a comfortable space. It is like driving: I drive an Alfa Romeo — it is so fun to drive, but it is not easy to drive. The ultimate result of attempts to make driving easier is to not drive at all! In the same way, the ultimate destination of a ‘convenient’ life is not to live at all. We’re trying to create spaces that encourage the enjoyment of living.”

“To create a boundary is the earliest, most primitive act of architecture,” says Nishizawa. “Primitive men made shelters in order to protect themselves from the elements and the environment. Outside was dangerous, with bears and lions; by building a shelter they could sleep safely inside. This involves making a boundary. So if you are going to design architecture, you can’t avoid this act. It’s fundamental.”

But while the definition of boundaries is intrinsic to architecture, the boundaries of SANAA’s buildings often seem insubstantial or ambiguous, with frequent use of transparent, reflective or perforated materials to blur edges and dissemble limits. Nishizawa says this arose from considering the relationship between a building and its environment.

“Architecture always has a site,” he explains. “This has lead to the mistaken belief that architecture must be smaller than its site. In Japan, there is this ‘box in box’ idea, that buildings are boxes within the outer bounding frame of the site. So the neighbor builds in colonial style; I build in Japanese style; the guy next door makes something postmodern. Yet architecture is always exposed — it inevitably changes the streetscape and the local environment.

“Our approach is to see buildings as being bigger than the site. This applies not only to the exterior, but also to the interior. We try to make architecture in which you can feel the environment.”

The use of such “soft boundaries” is part of what gives SANAA’s buildings their uncanny grasp of the contemporary zeitgeist. This is an architecture of openness, movement and flow. It is the spatial embodiment of an interconnected world in incessant motion, of Facebook lives conducted beyond traditional divisions of public and private.

“You know, at the beginning, I didn’t have any dream to work abroad. It’s just that Japanese competitions declined along with the economy, which meant that we had no choice but to look overseas for work. For us, the Pritzker Prize or the Venice Biennale was never a goal. The goal for the future is simply to continue making great architecture; that’s all. We are just at the beginning.” – Japantimes