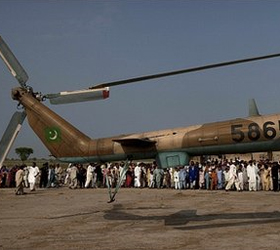 Pakistan’s rulers face criticism over the flood crisis, but the army – tarnished by its role in government and by military offensives – has boosted its image, as Jill McGivering reports.

Zarinabad is a small village of a few thousand people, close to Peshawar, in north-west Pakistan.

More than three weeks ago, it was swallowed up by floodwater.

Within a day, the villagers said, the water rose to a height of more than 15 metres (49ft).

Now it has started to recede – but the level is still far too high for the villagers to think about going back to their houses.

Instead they are living in tents on a narrow ridge of high ground, overlooking their waterlogged homes.

Men from the village waded back and forth through shoulder-high water, slowly salvaging their belongings, a few at a time. Plates, pots, low wooden beds, even an old sewing machine, all covered in dirty, noxious mud.

Since the floods came, they have had tents and a regular supply of clean drinking water and food, they said, provided by a German aid agency.

But they had received nothing from the government. As the men gathered, their anger was clear.

“We always used to vote for the ruling party, the Pakistan People’s Party,” one man said.

“But we haven’t had a scrap of help from them. Next time there’s an election, we won’t vote for them. We won’t vote at all.”

There was high praise though for the international agencies and for the army.

“The army did a really good job,” said another man. The crowd nodded.

“They set up three medical camps and they came with helicopters and rescued about 20 people from my village.”

A nearby army camp, part of the Army Service Corps, is now also a place of refuge. The army school has been taken over by homeless families, evicted by the floodwater.

The cement-floor classrooms had been converted into informal dormitories for women and children.

Most of the families had been able to go home, the army officers said, but people whose houses had been destroyed simply had nowhere else to go.

Asked about the army’s rescue and relief work and its impact on their public image, he admitted that the army’s reputation, tarnished by recent offensives in South Waziristan, had needed boosting.

“There was maybe a sentiment for the army previously but now people have realised that the army is doing for the betterment of the country,” he said.

“The people have seen by themselves how the armed forces work for them and came to help them.

“They went into the water and tried to pull out each and every individual who was stranded in the water. We have not let even a single person die.”

Nusrat, a teacher in the army school, is now living in her own classroom – another victim of the flood.

She says the army’s relief work has made a big difference to people’s attitudes.

“The army rescued us from flooded areas by helicopters and boats and gave us food, shelter, everything,” she said.

“People’s thinking about the army was so bad but today, our thinking is so changed.”

Back to old ways?

Visiting newly flooded areas in Sindh Province in the south of Pakistan – and to the north-west – the general impression on the ground is that much of the public anger about the way this crisis is being handled and aid delivered is targeted at the government.

The security forces are much more visible – distributing clean drinking water and aid.

But Hussain Haqqani, Pakistan’s ambassador to the US, challenged the idea that the government’s image was suffering at the expense of the army.

During a brief visit to Islamabad, he said the army was an agent of the government, not in competition with it.

“It’s not the civilian government that has helicopters and boats to be able to come to the rescue,” he said.

“In any country, disaster management, in a disaster of this nature, always involves the army.

“What we’re witnessing essentially is some hard-line opponents of the government politicising the entire tragedy of the floods and using it to criticise the president, the prime minister and the elected leadership.”

This all matters so much because of Pakistan’s history and the past pattern of strong army leaders taking control from weak civilian governments.

Syed Talat Hussain, a journalist with Pakistan’s Aaj Television, suggested that the army’s and the government’s differing reactions to the floods might affect the balance of power.

“There will be many people who would say that, in dire need, the democratically elected leadership wasn’t there for us.

“My fear is that if that were to be the argument, eventually Pakistan is going to drift back into its old ways.”

The civilian government is well aware of the problems it is facing.