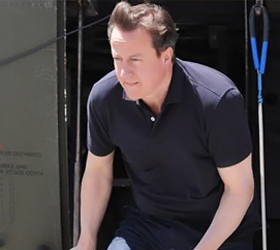 Senior military figures have expressed concern about the security arrangements for a recent trip by David Cameron to Afghanistan.

The prime minister had to change his schedule at the last minute because of fears the Taliban might be planning to attack his helicopter.

It is reported that Number 10 has been asked to carry out a security review.

BBC defence correspondent Caroline Wyatt says military sources were concerned over the threat to Mr Cameron during his first visit as prime minister to Helmand province in southern Afghanistan in June.

Mr Cameron was forced to abandon a visit to British troops serving at the front-line patrol base at Shahzad because of fears the Taliban were planning a possible attempt to bring down his helicopter.

The RAF Chinook carrying the prime minister and his entourage was instead diverted to the main operating base in the capital of Helmand, Lashkar Gah, at the last minute.

Mr Cameron had visited Kabul first, holding a media conference with Afghanistan’s President Hamid Karzai, before going on to Helmand.

A former British commander in Afghanistan, Colonel Richard Kemp, told the Today programme on BBC Radio 4: “We sometimes underestimate the Taliban’s sophistication (and) intelligence-collection capability, and they are very, very good at it.”

The Taliban had “sources in many places”, he said, including within the Afghan security forces and “even in military bases”.

But Col Kemp said it was important that people in Britain and Afghanistan were able to see the “commitment” of the prime minister, adding: “You can’t hide behind security to the exclusion of all else. He has to be out and about, he has to be seen.”

He suggested more attention, though, be given to the planning of future visits, with press conferences coming at the end of trips so as to minimise the amount of time available to the Taliban to plan any attack.

He said: “It’s very important that we don’t lose the prime minister. The massive victory that we hand to the Taliban by shooting his helicopter down, or even a near miss, would be very significant.”

In the past, visits to war zones by senior politicians and officials have often been subject to news blackouts until nearer the end of the trip, as was the case with the recent journey by Defence Secretary Liam Fox.

Mr Cameron had been due to meet the 1st Battalion Duke of Lancaster’s Regiment, but the Times newspaper reports Nato intelligence services intercepted telephone calls suggesting the Taliban were planning an attack.

The information was received within five minutes of the take-off of Mr Cameron’s Chinook, and the pilot was ordered to change course.

Earlier this year, police concerns about Mr Cameron’s security were reported over the prime minister’s insistence on walking around Whitehall and refusing motorcycle escorts.

Andy Bearpark, director general of the British Association of Private Security Companies, said he would welcome any review of security for future trips to Afghanistan.

He told BBC Radio 5 live: “Afghanistan is increasingly dangerous, increasingly violent and I think the biggest question is ‘should we have visits like this at all? Do we really need them?'”

Mr Bearpark said any future visits could take place with more secrecy: “You need to reveal the details afterwards, but a news blackout is obviously a good idea.

“The fear must be that it was an insider leaking the information. This is one of the most worrying features of what’s happening in Afghanistan at the moment.” – BBC