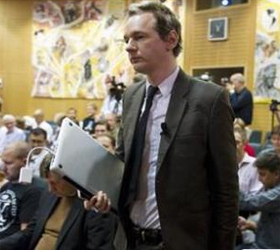 (Reuters) – Swedish police are to question WikiLeaks founder Julian Assange over alleged molestation, Sweden’s chief prosecutor said on Wednesday, but a second case against him has been dropped, she said.

“The investigation is still going on. I find there is a suspicion of molestation,” Eva Finne told Reuters Television.

“I’m going to tell the investigator to contact the suspect’s lawyer and they decide when it’s possible to hold an interrogation,” she said.

Assange, an Australian behind the whistle-blowing website, had been accused by two women of sexual molestation in Sweden, where he has spent the past couple of weeks.

Finne said there were no grounds to continue an investigation into a case which initially led a duty prosecutor to issue an arrest warrant for Assange for suspected rape.

That warrant was dropped on Saturday.

Assange has said through Twitter he is innocent of the accusations.

Claes Borgstrom, a lawyer representing the two women, was critical of the chief prosecutor’s decision. “I’m a little bit disappointed,” he told Reuters by telephone.

WikiLeaks, which published secret U.S. military files on the war in Afghanistan last month, said it plans to release a document from the Central Intelligence Agency on Wednesday.

Assange told Al Jazeera television on Sunday that he was warned by Australian intelligence of plans to discredit Wikileaks as it prepares to release more secret documents.

Finne dismissed any suggestion of a smear campaign.

“There is no indication whatsoever that supports a conspiracy theory,” she said.

The punishment for molestation in Sweden is usually a fine but can also be up to one year in prison, she said – Reuters