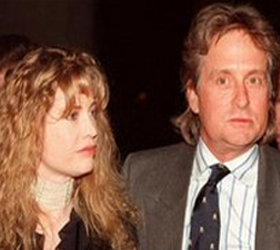 Lawyers for Michael Douglas and his former wife have clashed in court over her demand for half of his earnings from the forthcoming Wall Street film.

In their 2000 divorce settlement, Diandra Douglas was granted a share in proceeds from the actor’s work while they were together.

She is seeking earnings from the new film because he reprises the role of Gordon Gekko from the 1987 original.

A New York judge has not set a date for a ruling in the case.

Neither the actor, 65, nor his ex-wife – who were married for 23 years – appeared in court.

Last week it was revealed that Douglas, who is now married to actress Catherine Zeta Jones, was being treated for a tumour in his throat.

His publicist said he would undergo eight weeks of radiation and chemotherapy.

Lawyers for Ms Douglas say the divorce agreement gives her a right to a share in proceeds from spin-offs related to work he did during their marriage.

There had been no plans for a Wall Street sequel when the couple had been together, she said.

Ms Chinitz said Ms Douglas had made $6.3m (£4.1m) from her husband’s other past projects.

“It’s enough,” she told the judge.

“It’s time for Ms Douglas to move on and let Mr Douglas move on and enjoy his life without having to concern himself with someone trying to claw back moneys that they’re not entitled to.”

“Mr Douglas is seeking to shirk his financial responsibility that was entered into when he signed this contract.”

Wall Street: Money Never Sleeps is due out in the UK and US on 24 September.