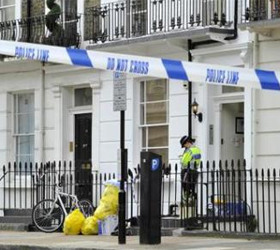 (Reuters) – A man who worked for MI6 has been found murdered at a flat near the agency’s headquarters, media said on Wednesday.

Police said they had found the body of the man aged in his 30s in the top floor flat in the upmarket Pimlico area of London on Monday afternoon.

The victim, named by broadcasters as Gareth Williams, had not been seen for some time and officers had gone to the flat after he was reported missing. A post mortem to determine the cause of death is being carried out on Wednesday.

Media reports said he was working for MI6, which deals with foreign espionage matters, on secondment from the Government Communications Headquarters (GCHQ), the government’s eavesdropping service.

“This is a police matter. It’s a long-standing policy of the government not to confirm or deny any individual working for the intelligence agencies,” said a spokeswoman for the Foreign Office.

The investigation into the man’s death is being carried out by the Homicide and Serious Crime Command, indicating that detectives do not believe the death to be related to terrorism or espionage matters.

“It was a terrible shock. I couldn’t believe that such a thing had happened,” William Hughes, a relative of Williams, told BBC TV.

“He had worked for GCHQ for many years. I knew he was working in London doing something but he would never talk about his work, and the family knew not to ask.” – Reuters