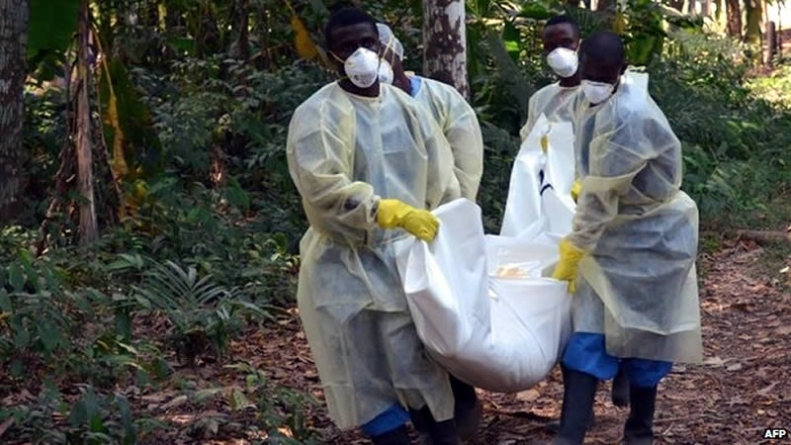 More than 26,000 people have been infected with Ebola since the outbreak began and more than 10,800 have died, the World Health Organization said Wednesday.

The UN health body also warned that the decline in confirmed cases appeared to have stagnated, urging increased efforts to stop transmission of the deadly virus. In all, 26,079 people have contracted the disease over the past 16 months, and 10,823 of them have died, almost all of them in Guinea, Liberia and Sierra Leone. After tearing through the three countries like wildfire, the spread of the virus has slowed to a crawl. In the week leading to April 19, 33 new confirmed cases were reported, with 21 in Guinea, 12 in Sierra Leone and none in Liberia. That compares to 37 new confirmed cases the week before, and 30 the week before that. “The decline in confirmed cases of Ebola virus disease has halted over the last three weeks,” the WHO said in its latest report. “To accelerate the decline towards zero cases will require stronger community engagement, improved contact tracing and earlier case identification,” it said.

On the bright side, Liberia, once the hardest hit country, has reported no new cases of Ebola since the last confirmed case died on March 27 and was buried a day later. If no new cases emerge. Liberia should be declared Ebola-free on May 9 — 42 days, or two incubation periods, after the burial of the last confirmed victim. The situation was more mixed in Guinea. The 21 new confirmed cases there marked a decrease from 28 a week earlier, and only one new confirmed case was reported in the capital Conakry, down from six the week before.

But of 11 confirmed Ebola deaths during the week leading to Sunday, six died in their communities with the diagnosis only made post-mortem. And for three consecutive weeks, fewer than half of new cases have come from lists of people known to have been in contact with Ebola patients, meaning health authorities still lack a full overview of transmission chains. Perhaps most worrying: last week Guinea reported 163 unsafe burials of victims of the highly contagious disease, up from 72 a week earlier.

The WHO however said the sharp increase was likely due to more reporting of such burials amid increased vigilance. Community resistance to efforts to halt the outbreak also continue to be a problem in Guinea, where 11 people were sentenced Wednesday to life in prison for murdering eight Ebola workers last September. The WHO said “instances of community resistance” had been reported in four prefectures last week, and that Conakry had reported at least one such incident a day for the past six weeks.  In Sierra Leone, meanwhile, the 12 new confirmed cases there marked an increase on the nine reported a week earlier. Half of the new cases were reported in the Western Area Urban, which includes the capital Freetown. As in Guinea, fewer than half of new cases came off lists of known Ebola contacts in the week leading to April 12 and last week, three cases of the disease were only discovered post mortem. –AFP