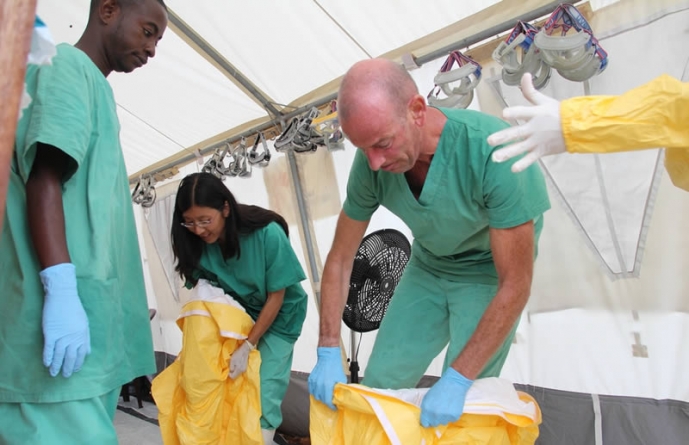 For every extra month that health care systems are disrupted, international researchers said up to 20,000 children aged between nine months and five years were put at risk. “It could be a long time before the health care systems in the region recover from this,” said Justin Lessler, an assistant professor of epidemiology at the Johns Hopkins Bloomberg School of Public Health, who co-led the study into the ripple effects of the Ebola epidemic. “While the downstream effects of Ebola are many, we can actually do something about measles relatively cheaply and easily, saving many lives by restarting derailed vaccination campaigns,” he told reporters in a telephone briefing. West Africa’s Ebola epidemic — the largest ever seen — has infected more than 24,000 people in Guinea, Liberia and Sierra Leone, killing almost 10,000 of them. Outbreaks of measles — one of the most transmissible diseases — often follow humanitarian crises as vaccination campaigns falter and populations are displaced and impoverished.

While Lessler’s team only looked in this study at measles risk, he said the Ebola epidemic had also disrupted delivery of vaccines against polio and tuberculosis and of a combined shot that protects against meningitis, pneumonia, whooping cough, tetanus, hepatitis B and diphtheria. The number of children not getting these vaccines in the region may be 600,000 to 700,000, he said, adding that health services for people with malaria, HIV and TB were also severely disrupted. “The secondary effects of Ebola — both in childhood infections and other health outcomes — are potentially as devastating in terms of loss of life as the disease itself,” Lessler said. For the measles study, the researchers modelled the consequences of various degrees of disruption to health services.

Before the Ebola outbreak, they estimated that about 778,000 children between nine months and five years had not had measles vaccines — about 4 percent of the population of Guinea, Liberia and Sierra Leone. Assuming a 75 percent reduction in health care, the level closest to reality at the time, for 18 months, they projected that the number of unvaccinated children could rise 45 percent to 1,129,000, or by around 20,000 a month. After 18 months of reduced healthcare, the study projected that a large measles outbreak would infect about 227,000 people instead of 127,000 — the vast majority young children. Lessler said this could mean 2,000 to 16,000 extra deaths. –Reuters