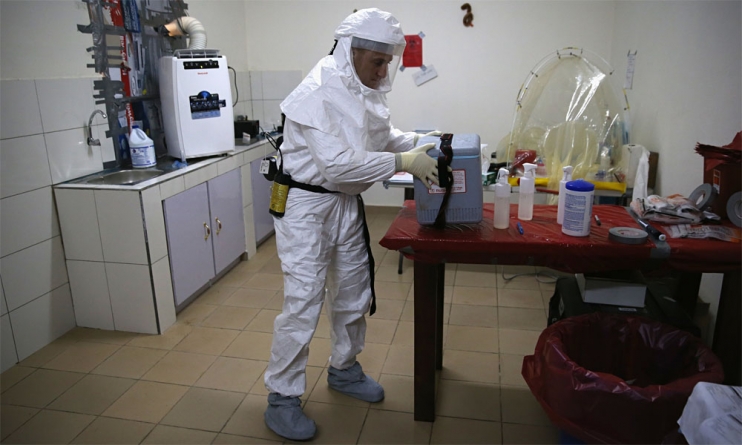 The World Health Organization (WHO) welcomes the approval by Swissmedic, the Swiss regulatory authority for therapeutic products, for a trial with an experimental Ebola vaccine at the Lausanne University Hospital (CHUV).

This marks the latest step towards bringing safe and effective Ebola vaccines for testing and implementation as quickly as possible. Approval means that the vaccine can be used on approximately 120 individuals in Lausanne. The trial, which is receiving support from WHO, is the latest in a series of trials that are ongoing in Mali, the United Kingdom, and the United States.

The vaccine is based on a genetically modified chimpanzee adenovirus (“ChAd-Ebola”; Chimpanzee-Adenovirus chAD3-ZEBOV). The trial will test the safety of the vaccine and its capacity to induce an immune response. Results from the CHUV trial will – together with the results of other centres involved – provide the basis for planning subsequent trials involving several thousand participants, and for choosing vaccine dose-level for efficacy trials.

Developed by the US National Institute of Allergy and Infectious Diseases (NIAID) and pharmaceutical company GlaxoSmithKline, the vaccine consists of a virus that is rendered harmless and used as genetic carrier for one Ebola protein. The application, submitted at the end of September 2014, was handled as a priority, given the dimensions of the Ebola epidemic in West Africa.

The trial is one of two in Switzerland coordinated by WHO. A second vaccine, rVSV-ZEBOV, is to be tested at the Geneva University Hospitals, concurrent to the Lausanne trial. “These are dosing and safety trials being held in advance of Phase II and III trials currently scheduled for late 2014-early 2015,” says Marie-Paule Kieny, Assistant Director-General for Health Systems and Innovation at WHO.

“If shown to be safe and effective, either of the vaccines could be scaled up for production during the first quarter of next year, with millions of doses produced for wide distribution in high-risk countries.” Trials in Lausanne will begin this week, with first results expected in December 2014. -who