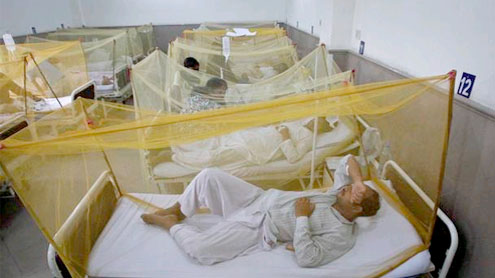 LAHORE: After unleashing a killing spree last year, dengue has reappeared in the city with 59 fresh cases reported at different hospitals of the provincial capital during the last two months.

As many as 59 fresh cases of dengue fever were reported during the first two months of 2012 in different hospitals across the provincial metropolis.According to details, 41 new dengue patients were admitted to Mayo Hospital, 13 to Sir Ganga Ram Hospital, three to Services Hospital and one each to the Lahore General Hospital (LGH) and Jinnah Hospital.
Experts say that dengue fever cases usually appear in September. They say dengue virus appears twice a year – first from February to April, and again from September to November.

This year, fresh cases have started appearing from the very start of the year, which indicated that the virus was becoming a greater threat, and also that the anti-dengue campaign needed to be conducted more vigorously. Last year, more than 378 people died of the fever across the province, and another 0.5 million were affected by the virus.In 2010, the first dengue case was reported in the mid of September, and the number of patients continued to increase during the next three months.

Punjab Health Department confirmed 5,693 cases during September to November 2010. However, according to unconfirmed statistics, at least 20,000 patients tested positive at the public and privat-sector health facilities across the province.Pakistan Medical Society Chairman Dr Masood Sheikh, along with Dr Shahid Malik and Dr Salman Kazmi, told Daily Times that according to some unconfirmed reports, more than 40 patients had tested positive for the virus across the city.

They said there existed simple methods to prevent breeding of the dengue mosquito, like changing the water in flowerpots daily. Water left in tyres, bottles and bathtubs also needed to be removed, they said. They advised citizens to fumigate their surroundings and install blue lights in their houses to repel mosquitoes.Punjab Health Department spokesman said that on recommendations of the Dengue Experts Advisory Group headed by Prof Faisal Masood, the department had already issued instructions to all public-sector hospitals to carry out NS-I test for confirmation dengue fever.

The spokesman said that the dengue cases reported in media were the patients who had visited different hospitals during the last two months and had not been confirmed by the test facilities set up by the Punjab government. He further said that NS-I test for dengue suspected patients admitted at the Mayo Hospital had been conducted by the expert doctors and proved negative. The spokesman said that the guidelines prepared by the Dengue Experts Advisory Group for diagnosis and treatment of the fever during the season when majority of the cases appear, had already been issued to the administration of all public-sector hospitals in Punjab. – Dailytimes