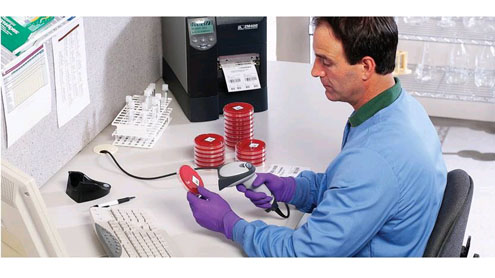 The California sky outside the doctor’s window is impossibly blue, and while his lips are moving, I’ve stopped listening. The sky reminds me of the Colorado mountain-top where I scattered my father’s ashes a few years ago, and I flash to the image of my 8-year-old daughter standing where I stood, sobbing. “She’s never been to a funeral,” I think.

I snap back to the man in front of me, Dr. David Agus, the kind of specialist you call if you are very rich and very sick. But I am neither, I feel great and I wouldn’t even be here if ABC News hadn’t sent me. After treating the likes of Steve Jobs, Lance Armstrong and Ted Kennedy, Agus was set to release the most anticipated medical book of the year, and we beat “60 Minutes” to snag the coveted first interview.As a way to illustrate the kind of technology he uses, Agus put me through a battery of various tests, including a full-body CT scan. It was all very fun and interesting right until the moment he showed me a picture of the calcification in my heart and told me that if I didn’t make some changes, I’d drop dead within five years.

“These lesions in significant arteries in the heart can cause heart attacks in the near term,” he said with a noticeable shift in his upbeat tone. “So when we read in the paper about the 45-year-old who went jogging and died of a heart attack. These are the things we worry about.”So this is it. After countless trips to jungles, glaciers and war zones, my first real brush with mortality comes in an office in Beverly Hills. And then fear shifts to guilt. “I deserve this,” I thought.

Sure, I don’t smoke and I exercise daily but I can’t remember my last check-up and don’t even have a regular doctor. And while I eat plenty of vegetables and somehow still fit into my college pants, my food pyramid is built mostly with cheese, meat and beer. I’ve survived 44 years with the willfully ignorant attitude that doctors are for sick people, and I never get sick.All of this makes me a perfect illustration for “The End of Illness.” In his new best-seller, Agus makes the staggering admission that man may never understand cancer, much less cure it. But by employing modern science with old fashioned common sense, he thinks we can prevent deadly diseases altogether.

But it will never happen until he convinces multitudes of boneheads like me to take control of their own health care. With today’s cutting edge technology, it is possible to know more yourself than you ever imagined. And even if your genetics are stacked against you, you can use the knowledge to change the odds.”(Imagine) you’re in front of two Chinese restaurants,” he explained. “And you look at the ingredient list, they’re exactly the same. You taste the food, they’re different. Genetics are your ingredient list. You now have the potential to change the recipe a little. And that’s the environment.”

To better understand my ingredients, Agus mailed me a sterile tube a couple weeks before our interview. After sending back some spit, technicians as his company, Navigenics, scanned my DNA for the health risk markers of 40 different common diseases.”Everything we see here is what we call a predisposition,” he said, holding the results. “So it’s not going
to happen but it’s just saying your likelihood of developing certain diseases.”He continued, “If you look at Alzheimer’s disease, which is what we’re all worried about, the national average 9 percent. You’re 5 percent.””Phew, that’s a relief,” was the obvious reply.

“That’s a relief but it’s still not zero,” Agus said. “One of the big criticisms of a test like this is I just told you you’re lower than the average. So you don’t worry about it at all and you do behaviors that may increase your risk.”He explained how I’m below the average risk for a brain aneurysm, colon cancer and — get this — a heart attack. But that’s only because the average American man has a 42 percent chance of having a Fred Sanford-style grabber — 42 percent! My average is 38 percent and helps explain the dairy-induced coral reef growing in my ticker.”You can blame your parents,” Agus said. “You inherited a predisposition to atherosclerotic disease.”

Now, here’s the rub: This DNA information and the high cholesterol warnings that came from my blood test would have given me cause to worry — a bit. But they would not have shaken me to the core like seeing the CT scan of my heart. So it was a $1,300 ride through that radiation doughnut that probably saved my life — a test most insurance company would probably reject and some doctors would resist, for fear of “false-positives.” This is one the main things Agus is trying to change.

“Reimbursement for preventive medicine’s always difficult in our country,” he told me. “You know, the problem is most people change health plans all the time. So if you’re that health plan, why should you spend money on something that’s not going to affect a person until a decade from now? And so one of things we really have to change is we have to push prevention… a heart attack costs hundreds of thousands of dollars. A couple hundred dollar tests along with a drug can prevent it. Obviously it’s cost effective as a return on investment.”

As for the fears that CT scans could both scare and bankrupt a person by showing a scary speck that turns out to be nothing, Agus argues that is no reason to reject them entirely.”There are false positives or false negatives with any technology,” he said. “It matters who does it and where it’s done. And so, like with anything, any person can pick up a camera and take a picture. But very few people are a Cartier-Bresson, one of the great photographers. It’s the same thing here.”The more we talked, the more the initial shock faded and I began to realize just how lucky I was to get this assignment. Because the fixes are incredibly easy.

To keep the blood pumping properly, I’ll take a statin and a baby aspirin. Since my HDL (good cholesterol) levels are in fine shape, he explained that I don’t need a low-fat diet, but a “good-fat diet,” — olive oil, canola oil, smart-heart eggs and cold-water fish — eaten on a consistent schedule. When you have lunch at noon one day and 3 p.m. the next, you’re releasing stress hormones that can hurt in the long run, Agus said.Instead of hitting the gym hard in the morning and then sitting all day (which can be as bad for you as smoking), the doctor encourages more movement throughout the day. I now carry a FitBit monitor to let me know how much I’m moving and how well I’m sleeping.

And he ordered me to skip the fish oil capsules and multivitamin in favor of the freshest real food I can find.”You’re not vitamin deficient,” he told me. “You look at all the large studies with vitamins and most of them have caused problems rather than benefits. And you don’t need to be on them. So real food, regular schedule, live healthy. That’s the key.”And that is how I turned into the kind of person I used to mock.

I dug the treadmill out of the back of the garage, and actually walked five miles while writing this piece. And for the first time in my life, instead of bratwurst, I grilled salmon during last weekend’s Packers game. And I’m pretty sure that’s why they lost. But that is a small price to pay if I can keep my daughter from sprinkling ashes on that mountain for another 50 years. – Yahoonews