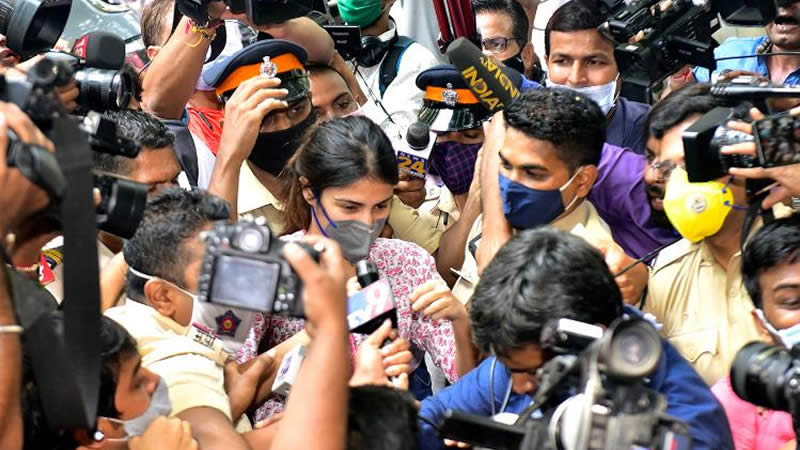 A Bollywood actress has been arrested on alleged drugs offenses in the latest development of an ongoing celebrity saga that has transfixed the Indian public and dominated headlines for months.

Media has reached out to Chakraborty’s lawyer for comment.

Rajput, 34, was found dead in his flat in Mumbai in June in what police described as a suicide. Indian authorities have conducted an autopsy but have not made an official statement on the result. Mental health and suicide remains a taboo in India.

Shortly after his death, Rajput’s father KK Singh filed a police complaint in Bihar, the Indian state he lives in, accusing Chakraborty — who is a lesser-known Bollywood star — of stealing money from her boyfriend’s bank account and abetting his suspected suicide. Authorities have not provided details on how she may have allegedly abetted Rajput’s suicide.

Chakraborty has denied those allegations. “It is really sad that it is 2020 and in India I am still having to pay this price today just because I’m in his life, I loved him and lived with him,” she told CNN affiliate News 18 last month.
According to a court document, Chakraborty and Rajput lived together, although a few days before Rajput’s death, Chakraborty moved into her own Mumbai residence.

In August, a case based on Rajput’s father’s allegations was transferred to the Central Bureau of Investigation, a federal law enforcement agency, which told CNN Wednesday that it does not comment on active investigations.

In total, authorities have arrested 10 people in relation to the case, including Chakraborty, according to the Narcotics Control Bureau’s Jain.

Chakraborty has been remanded for 14 days over a range of offenses including allegedly purchasing and consuming drugs, Jain said. The authorities did not recover any drugs from Chakraborty, who admitted buying drugs for her boyfriend,
Rajput, according to Jain. Those offenses carry a possible penalty of 10 years in prison and a fine of 100,000 rupees ($1,360).

Chakraborty has not yet been charged of a crime.

Although authorities have arrested 10 people, they have not charged anyone with aiding Rajput’s suicide.

“The case is about drugs … it is not our mandate to look into the suicide,” Jain said. “The investigation is progressing and as we go along we will try to do some more work and look at the entire network.”
For months, Rajput’s death and the ensuing fallout have been covered extensively in Indian media. Even as India’s coronavirus outbreak has grown into the second-largest in the world, media headlines have been dominated by the twists and turns of Rajput’s case.

Bollywood actor Rhea Chakraborty with brother her Showik before they were questioned by the Central Bureau of Investigations in connection with Sushant Singh Rajput’s death.

But the coverage has often become sensationalist, with unverified conspiracy theories and allegations given air time on nationwide newscasts.

Chakraborty has borne the brunt of the media circus. In a tweet in July, Chakraborty begged the Union Home Minister Amit Shah to launch an investigation into the case. “I only want to understand what pressures prompted Sushant to take this step,” she said.

In a press release earlier this month, the CBI said it was conducting an investigation into Rajput’s death in a “systematic and professional way.”

“Certain media reports attributed to CBI investigation are speculative and not based on facts,” CBI said in the release.

Rajput made his debut in Hindi cinema in 2013 in “Kai Po Che!,” according to the film site IMDb. He was awarded best actor (male) at the Indian Film Festival of Melbourne in 2017 for his movie “M.S. Dhoni: The Untold Story,” in which he played Indian cricket star Mahendra Singh Dhoni.