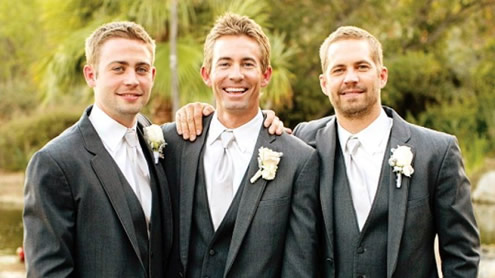 Paul Walker’s brothers are stepping to help finish filming on “Fast & Furious 7,” the film Walker was in the midst of making when he died in November.

Caleb Walker and Cody Walker have been enlisted to complete their brother’s action scenes and “fill in small gaps left in production,” Universal Pictures said in a statement Tuesday on the film’s Facebook page.

“Having them on set has made us feel that Paul is with us too,” read the statement. Production on “Fast & Furious 7” recently resumed after it was suspended following Walker’s death. The 40-year-old Walker died in a car crash on Nov. 30 outside Los Angeles along with his friend Roger Rodas. A police investigation found the Porsche that Rodas was driving was traveling up to 94 mph when it went out of control.

The release of “Fast & Furious 7” was delayed to April 2015 following Walker’s death. The film, which is directed by James Wan and also stars Vin Diesel and Tyrese Gibson, has since been adjusted to incorporate the footage shot with Walker and give his character some kind of send-off.

“It will allow the character of Brian O’Conner to live on and let us celebrate Paul in his most defining role,” read the statement. – Yahoo