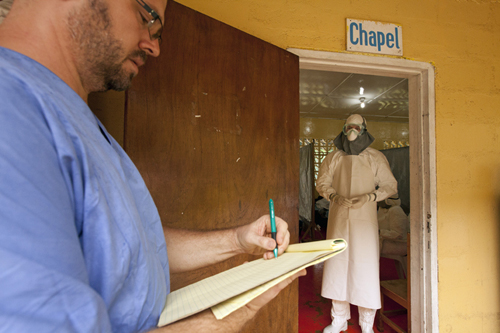 A physician with Doctors Without Borders who returned from West Africa recently has tested positive for Ebola at a New York City hospital, the city’s mayor confirmed.

The doctor developed a fever and gastrointestinal symptoms, the New York City Department of Health and Mental Hygiene said in a statement on Thursday.

The doctor has been identified as Craig Spencer, who lives in Manhattan’s Harlem neighborhood, according to New York City Councilman Mark Levine. A person in New York City, who recently worked with Doctors Without Borders in one of the Ebola-affected countries in West Africa, notified our office this morning to report having developed a fever,” Doctors Without Borders said in a statement. Mayor Bill de Blasio at a news conference early on Friday said “New Yonkers have no reason to be alarmed… Every hospital in the city is prepared in case other patients come forward.

“”It is our understanding very few people were in direct contact with him… Every protocol has been followed.” “We’re hoping for a good outcome for this individual,” he said. New York State Governor Mario Cuomo also said that proper procedures are being followed in treating the patient. “We have the situation under control,” he said. “The more facts you know, the less frightening the situation is.” The doctor reported his fever on Thursday morning, and Doctors Without Borders said it promptly notified the city health department. The patient, who returned to the United States within the past 21 days, is being treated at Bellevue Hospital, the health department said.

Twenty-one days is the maximum incubation period for Ebola. Bellevue, a historic city hospital, is one of the eight hospitals in New York state designated earlier this month as part of an Ebola preparedness plan. Spencer’s Facebook page showed a photo of him clad in protective gear. It shows he went to Guinea around September 18 and then to Brussels on October 16. Spencer has been a fellow of international emergency medicine at Columbia University-New York Presbyterian Hospital in New York City since 2011, according to his profile on the LinkedIn career website. Columbia did not respond to a request for comment. The health department said it was tracing all of the patient’s contacts to identify anyone who may be at potential risk.

It said the patient had been transported by a specially trained unit wearing protective gear. The case is the first infection reported in the US state of New York, and the fourth in the entire US. Earlier in October, a Liberian man who travelled to the US state of Texas from Liberia, contracted the disease, and later died at a Dallas hospital. Two nurses who helped with the case also tested positive, and are still recuperating at different medical facilities in Georgia and Maryland.

US Woman Who Gouged Her Eyes Sues Over Viral Photo