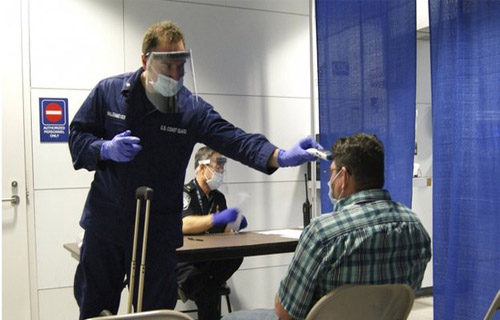 The World Health Organization’s emergency committee is holding talks to discuss the Ebola epidemic. The meeting in Geneva will examine screening measures at borders and consider whether stricter travel regulations should be put in place.

New rules in the US require travelers from the worst affected countries to arrive at one of five airports. Meanwhile, a curfew has been imposed in a town in Sierra Leone after two people were shot dead in riots on Tuesday. The current outbreak of the virus has already killed more than 4,500 people – mostly in Guinea, Liberia and Sierra Leone.

The WHO has faced criticism it reacted too slowly to the spread of the disease. Its emergency committee is meeting to discuss Ebola for the third time with the aim of assessing the efforts so far to contain and control the virus. The riots in Sierra Leone’s town of Koidu began as protests against attempts to place an elderly woman, said to be 90 years old, under quarantine. The woman has since died but it is not clear whether she actually had Ebola, the BBC’s Umaru Fofana reports from the capital, Freetown.

New rules are coming into force in the US requiring air passengers from Sierra Leone, Liberia and Guinea to travel via O’Hare in Chicago, JFK, Newark, Washington’s Dulles or Atlanta airports, where they will undergo enhanced screening. The new security measures come as public concern grows in the US, where a Liberian man died from Ebola and two nurses who had treated him became infected.

Elhadj As Sy, secretary general of the International Federation of the Red Cross, described calls for travel bans to contain the epidemic as “irrational”.

“It [Ebola] creates a lot of fear and extreme panic that sometimes leads to very irrational types of behaviours and measures, like closing borders, cancelling flights, isolating countries etc…” he said. “The only solution is how can we join our efforts to contain those kinds of viruses and epidemics at their epicentre, right where it starts.” -bbc

Mobile Phone Service Likely to be Suspended in Muharram